In the Know: The cybercrime law

Its original goal was to penalize acts like cybersex, child pornography, identity theft and unsolicited electronic communication in the country.

However, a provision expanding the scope of libel law to cover Internet posts was opposed by various groups, which asked the Supreme Court to issue a temporary restraining order (TRO) and a status quo ante order.

The cybercrime law could see Internet users sentenced to up to 12 years in prison for posting defamatory comments on Facebook or Twitter.

Online libel was not part of the original bill proposed by the Department of Justice (DOJ) but was one of the amendments inserted by the Senate as proposed by Sen. Vicente Sotto III. 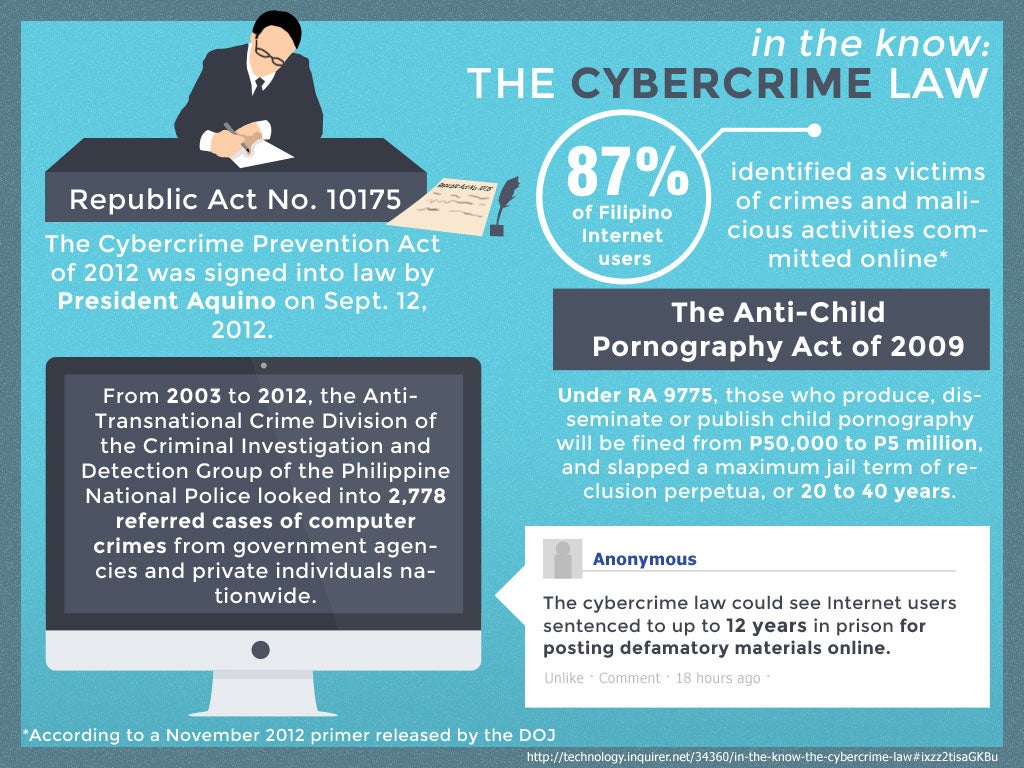 On Oct. 9, 2012, six days after the law took effect, the Supreme Court issued a four-month injunction while it scrutinized the law for possible violations of constitutional provisions on freedom of expression. On Feb. 6 last year, the high court extended the TRO indefinitely.

RA 10175 punishes content-related offenses such as cybersex, child pornography and libel which may be committed through a computer system. It also penalizes unsolicited commercial communication or content that advertises or sells products or services.

But there are exemptions relating to the sending of unsolicited material: It is not a crime if there is prior consent from the recipient, the communication is an announcement from the sender to users, and if there is an easy, reliable way for the recipient to reject it, among others.

Individuals found guilty of cybersex face a jail term of prision mayor (6 years and one day to 12 years) or a fine of at least P200,000 but not exceeding P1 million.

Child pornography via computer carries a penalty one degree higher than that provided by RA 9775, or the Anti-Child Pornography Act of 2009. Under RA 9775, those who produce, disseminate or publish child pornography will be fined from P50,000 to P5 million, and slapped a maximum jail term of reclusion perpetua, or 20 to 40 years.

Persons found guilty of unsolicited communication face arresto mayor (imprisonment for 1 month and 1 day to 6 months) or a fine of at least P50,000 but not more than P250,000, or both.

The law also penalizes offenses against the confidentiality, integrity and availability of computer data and system, such as illegal access, illegal interference, data interference, system interference, misuse of devices, and cybersquatting.

It defines cybersquatting as the acquisition of a domain name on the Internet in bad faith or with the intent to profit, mislead, destroy one’s reputation or deprive others from registering the same domain name. Also covered by the law are computer-related forgery, fraud and identity theft.

As many as 87 percent of Filipino Internet users were identified as victims of crimes and malicious activities committed online, according to a November 2012 primer released by the DOJ, which quoted a 2010 report of the security software firm Symantec.

These included being victimized in activities such as malware (virus and Trojan) invasion, online or phishing scams and sexual predation.

From 2003 to 2012, the Anti-Transnational Crime Division of the Criminal Investigation and Detection Group of the Philippine National Police looked into 2,778 referred cases of computer crimes from government agencies and private individuals nationwide.—Inquirer Research