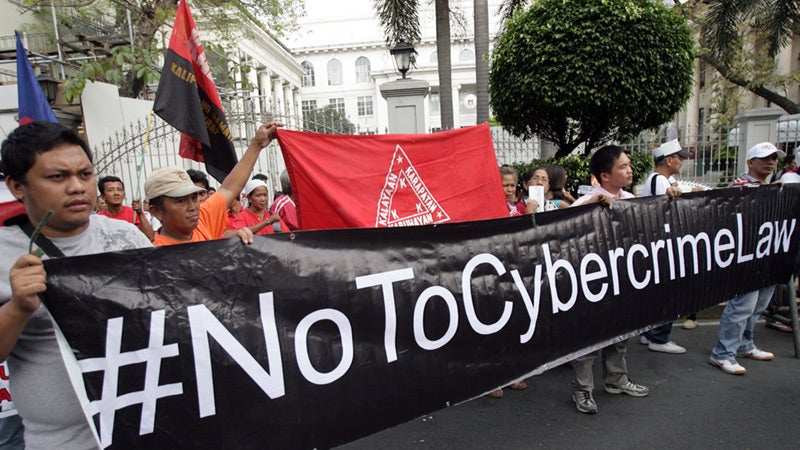 Militants gather in front of the Supreme Court building in Manila on Tuesday to protest against the cybercrime law. INQUIRER PHOTO/NIÑO JESUS ORBETA

MANILA, Philippines—The Supreme Court on Tuesday upheld the constitutionality of a provision in the controversial Cybercrime Prevention Act of 2012 penalizing online libel amid fears it infringed on Internet freedom.

Likewise, the high court endorsed a provision that seeks to penalize authors of libelous online content but not those receiving and reacting to it.

The court, however, struck down a section in the law that allows the Department of Justice (DOJ) to block access to online content.

After more than a year, the high tribunal finally ruled on the constitutionality of certain provisions in the cybercrime law that were raised by 15 petitioners.

The implementation of Republic Act No. 10175, which President Aquino signed into law in September 2012 to fight crimes committed on the Internet, like cybersex and child pornography, had been suspended for over a year.

The law can now be implemented without the provisions that were struck down.

Solicitor General Francis Jardeleza, who was at the high court to attend the last oral arguments on the Disbursement Acceleration Program, refused to comment on the ruling until he has read it.

At a media briefing, Supreme Court spokesman Theodore Te said the tribunal had “partially granted” the relief sought by the petitioners.

Of the 19 questioned provisions, the court declared four unconstitutional: Sections 4(c)(3), which penalizes the posting of unsolicited commercial communications (or spam); Section 12, which authorizes the collection or recording of traffic data in real time; Section 19, which authorizes the DOJ to restrict or block access to suspected computer data; and Section 7 “as far as it authorizes the prosecution of an offender under online libel and libel under the Revised Penal Code (RPC) and also where it pertains to child pornography for being in violation of the prohibition against double jeopardy.”

The court noted that “online libel is admittedly not a new crime but one already punished under Article 353 (which defines libel in the RPC); Section 4(c)(4) (or online libel) merely establishes the use of a computer as another means of publication. For this reason, charging the offender under both laws would be a violation of the guarantee against double jeopardy under Article III Section 27 of the 1987 Constitution,” said the statement released to the media.

Bayan Muna Rep. Neri Colmenares, one of the petitioners, said they would challenge the ruling.

“No one should go to prison just for expressing oneself, especially on the Internet, where people express their frustration with government,” he said.

Also, the court qualified that Section 5 of the law, which penalizes anyone who aids or abets the commission of cybercrimes and anyone who attempts to commit cybercrimes was “not unconstitutional” in connection with the commission of the following: illegal access, illegal interception, data interference, system interference, misuse of devices, cybersquatting, computer-related fraud and identity theft and cybersex.

But this was deemed unconstitutional “only in relation to offenses punished by child pornography and unsolicited commercial communications and online libel.”—With a report from AFP