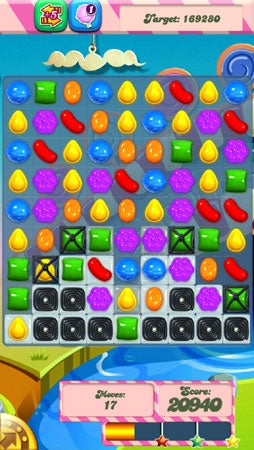 SAN FRANCISCO – Candy Crush is out to tempt investors with the sweet taste of success while avoiding the sourness left in the mouths of those who bit into social game maker Zynga.

King Digital Entertainment, the developer behind the wildly addictive puzzle game, said this week that Candy Crush is seeking a listing on the New York Stock Exchange.

The news set the Internet abuzz with chatter from those crowing about the mobile game’s dizzying success and from the cynical hearkening back to the lackluster fate of Farmville maker Zynga.

Zynga pioneered online social gaming at a time when Facebook was center stage and got caught on its heels when players enthralled by free play on smartphones or tablets flitted away from the San Francisco-based company’s titles.

“The trouble is, sometimes pioneers catch the arrows.”

Zynga was an early innovator, and is not out of the game, although its stock is about half the price it was when the company made its stock market debut at the end of 2011.

While no one can predict how long a game will be a hit, Candy Crush has shown staying power and King has the benefit of learning from Zynga’s woes.

“Like anything else that comes to market and trades on popularity instead of business fundamentals, you have to be aware that the two will collide and the guys on the popularity side are going to lose,” said independent analyst Rob Enderle of Enderle Group in Silicon Valley.

Candy Crush – King’s top-seller – started life as a Facebook game in 2012 but can also be played online and on smartphones.

The game is free, but players can pay for in-app extras to help them pass up through its more than 500 levels.

In a move that encourages players to spread the game, Candy Crush lets people call on friends or family at Facebook to download the title and help them advance.

In a promising note, Candy Crush has characteristics in common with classic title Tetris, which remains a star at nearly 30 years old.

Millions of commuters, teenagers  – even pensioners – clock in daily to test their skills at the game, which involves lining up tiny pieces of colored sweets to make them vanish from the screen of their computer or mobile phone.

King rolls out new features and doesn’t rest on laurels, according to analysts.

A constant peril for makers of mobile games, which are often free, is that players can be fickle in their loyalties.

“It is one thing to have a game that is a cultural phenomenon,” Steinberg said.

“It is another to have one with a user base that stay loyal year in and year out.”

Candy Crush has “struck a nerve” and King is using it as a springboard for other games, according to the analyst.

Enderle warned that the buzz ahead of King’s initial public offering may signal a feeding frenzy that could put early investors on the thin wall of a “mini-bubble.”

The analyst was leary of mobile or social game companies overall, reasoning that popularity tended to be fleeting and their business models yet to be perfected.

“Zynga showed that you are as good as your last game,” Enderle said.

King Digital Entertainment said it has asked the US Securities and Exchange Commission regulatory body for clearance to list shares on the New York Stock Exchange under the ticker symbol KING.

King hopes to raise some $500 million, according to an estimate in its SEC filing.

Candy Crush records some 700 million sessions a day and racks up daily sales of $850,000, according to the IDATE digital research and consultancy firm.

It claims to have 324 million monthly unique users for 180 games in 14 languages, available through its King.com website but also on mobile platforms run by Apple, Google and Amazon, and on Facebook.