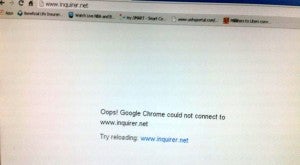 “Our technical team thoroughly looked into the matter and by 20 February 2014, the issue has been completely resolved,” Mapolon said.

Mapolon added that downloading files and the surfing of all sites are back to normal operations.

The statement was issued after Sky broadband subscribers reported difficulty accessing INQUIRER.net on Wednesday and Thursday.

On Thursday, tests and feedback from readers showed the website could not be accessed via the ABS-CBN Corporation-owned internet service provider.

“Rest assured that proper measures are being looked into to prevent similar occurrences in the future,” Mapolon said.

ADVERTISEMENT
TOPICS: INQUIRER.net, Internet, Sky broadband, SKY Cable Corporation
Read Next
Candy Crush tempts investors with sweet success
EDITORS' PICK
LIST: What to expect in areas under GCQ, MGCQ
PNP to maintain checkpoints during GCQ to ensure compliance to health protocols
Notice of 2020 regular meeting of stockholders June 18, 2020
DOTr bares 2 phases of public transport revival in GCQ areas
SM prepares for ‘safe malling’
Leveling up your ‘lutong bahay’ with the kitchen companion you never knew you needed
MOST READ
LIST: What to expect in areas under GCQ, MGCQ
Duterte approves Metro Manila’s shift to GCQ starting June 1
DOH explains: Only 109 of record-high 539 COVID-19 patients were ‘fresh cases’
OFW back in Leyte hometown but tests positive for coronavirus
Don't miss out on the latest news and information.