A hard look at elderly poor in booming tech city 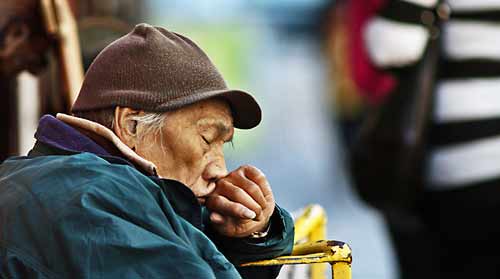 • Measure of federal poverty level at $11K a year doesn’t include costs of health, housing, etc.

SAN FRANCISCO, California – This city is gaining national attention for its tech boom—its post-recession economic recovery as technology firms like Twitter and Microsoft’s Yammer move into its inner city area.

But the district’s rising tide of prosperity and high-tech youth is driving up rents and other costs for the city’s elder ghetto, an area that long has been affordable for very low-income, often ethnic seniors.

While the official Federal Poverty Level (FPL) shows that less than one in 10 American seniors are poor, that measure, created a half century ago, was based on the assumption that food accounted for one-third of household budgets.

To determine a typical poverty level, government economists of 1964 calculated the price of the lowest-cost market basket—and tripled it to get a subsistence-level household budget. That became the federal poverty line. To this day the FPL doesn’t include the costs of health care, housing, transportation and other substantial monthly expenses.

Social scientists have developed new, more accurate poverty measures, such as the Elder Index. UCLA researchers use the Elder Index to show that that fully half of Californians 65 or older are either impoverished or struggling to make ends meet.

That’s why in 2011 California became the first state to adopt the Elder Index as a planning tool for service agencies for seniors.

The Elder Index, also being used to gauge poverty nationally, shows that people 65-plus in California need two-to-three times the FPL to cover senior’s actual cost of living.

In pricey San Francisco, for instance, the federal measure says one person was impoverished at $10,890 or lower in 2013. But UCLA’s Elder Index research reveals that a single renter here needs $29,144 just to get by.

Looking at every county, UCLA found that half of California seniors–and two-thirds of Latino and African American elders–are struggling to make ends meet.

Although the study did not drill down to San Francisco’s neighborhoods, U.S. Census data show that official poverty levels for elders in the Central City are at 32.6 percent, compared with 13.6 percent citywide. Even with the neighborhood’s subsidized rents, as many as two-in-three central city seniors are in poverty or struggling to get by.

That includes people profiled in this Special Report, such as Brenda Washington, 64, who scrapes by on $1,015 per month from Social Security Disability Insurance. Or Jose Mendez, also 64, who gets along on $868 monthly in Supplemental Security Income. And Young Taek Lim, 75, who can make do with about $800 a month from Social Security only by renting his bedroom and sleeping on a futon in the living room of his one-bedroom apartment.

(Nearly 50,000 seniors, approximately 32 percent of the city’s older citizens (60+), speak limited English; 5 percent are Tagalog speakers, according to data from SF’s Office on the Aging.)

The Elder Index is one of several gauges developed in recent years to provide a more realistic picture of American poverty. For instance, the National Academy of Sciences debuted its Supplemental Poverty Measure in 2009.

And the Senior Financial Stability Index, developed by Brandeis University and the think tank Demos, found, showed, other things, that 91 percent of both African-American and Latino seniors face financial vulnerability.

These and other measures developed in recent years show that experts agree widely that the United States needs to set aside the old FPL and adopt a new and more honest math that recognizes the needs of our rapidly aging and diverse population.

Paul Kleyman is director of NAM’s ethnic elders newsbeat. This series is part of a larger project by NAM, “Growing Older Getting Poorer,” that is funded by The Atlantic Philanthropies to generate in-depth coverage of issues seniors face wherever they live, whatever their ethnicity.