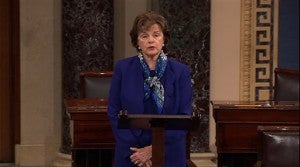 WASHINGTON — The head of the U.S. Senate Intelligence Committee says the CIA improperly searched a stand-alone computer network established for Congress as part of its investigation into allegations of CIA abuse in a Bush-era detention and interrogation program.

Sen. Dianne Feinstein said the incident has been referred to the Justice Department by the CIA’s inspector general. In lengthy remarks on the Senate floor on Tuesday, Feinstein said the search in January raised grave concerns that constitutional rights were violated.

At issue is whether the CIA violated an agreement made with the intelligence committee about monitoring the panel’s use of CIA computers. The CIA provided the computers to congressional staffers in a secure room at its headquarters so that the committee could review millions of pages of top secret documents.