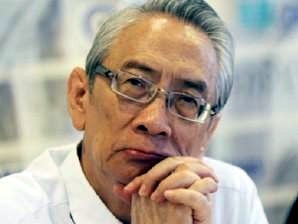 MANILA, Philippines — This senior prelate has jumped on the “selfie” bandwagon too.

Archbishop Emeritus Oscar Cruz proudly announced that he took his very first “selfie” Wednesday, a day after Time magazine online revealed a study showing that the cities of Makati and Pasig in Metro Manila had the biggest number of selfie-taking activities as a proportion of a locality’s population, beating the city that never sleeps, New York.

Cruz, who tries to keep up with technology and strives to be present in social media through his blog and social networking sites Facebook and Twitter, sent his “selfie” to a friend through his cellphone on Wednesday.

“I just did one selfie this morning while facing the mirror!” Cruz told reporters in a text message.

To determine the “selfiest” places on earth, Time built a database of more than 400,000 Instagram photos tagged “selfie” that included geographic coordinates. The database showed that Makati and Pasig City topped the list with 258 selfie-takers per 100,000 people.

The 79-year-old retired archbishop needed more practice though. His “selfie,” which was taken in front of a mirror, showed his mobile phone covering much of his face.

“My phone is as old as me. If I attempt to get my own picture without facing the mirror, I’ll just probably get a shot of my hair or an ear,” Cruz explained. “It’s okay,  at least I attempted to do a selfie,” he added.

Aside from maintaining a Facebook and Twitter account, Cruz also has a blog (www.ovc.blogspot.com), which contains most of his opinions and comments on various political and social issues, among others.

The Vatican has been encouraging the clergy around the world to use the Internet and social media as a pulpit to proclaim the Gospel. Pope Francis himself has been active online. He also appeared in a “selfie” photo with a group of teenagers visiting the Vatican in August last year.

In January, Filipino bishops were given a crash course on how to use the social media at their annual plenary assembly.