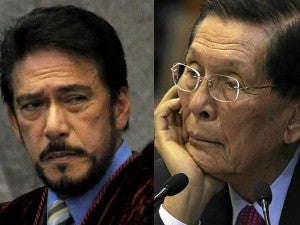 MANILA, Philippines—While Senators Alan Peter Cayetano and Jose “Jinggoy” Estrada slugged it out regarding the latter’s use of inappropriate words in his speech attacking the credibility of Dennis Cunanan and Ruby Tuason, two of their colleagues were spotted busy playing electronic games.

Sen. Vicente “Tito” Sotto drew out his tablet and made proper use of his time: He played Candy Crush.

According to a tweet from INQUIRER Radio 990AM’s Chona Yu, Sotto was seen tinkering with his white iPad while the Cayetano and Estrada traded views  on the proper use of the term “trial by publicity.”

Sotto may like crushing some candies, but Sen. Juan Ponce Enrile preferred to play a different app to kill time.

Vanishing some jewels in Bejeweled.