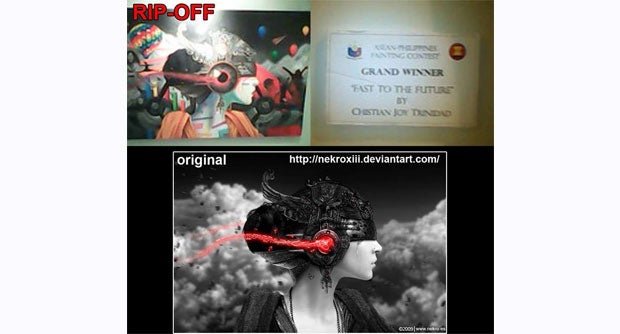 MANILA, Philippines—He may have dubbed it as the “future,” but a ghost from the past wants answers.

Using the Internet as the canvass, an artist who goes by the username NekroXIII accused Christian Joy Trinidad of copying one of his artworks posted on media-sharing website Deviant Art.

NekroXIII posted on Facebook that he received “messages” warning him that Trinidad used his work titled “Music for my eyes,” when the latter won the grand prize of the Association of Southeast Asian Nation’s art contest for its 46th anniversary in August the past year.

Trinidad added multi-colored elements, such as balloons, bars, and a Filipiniana costume, to the piece that originally featured a woman wearing a helmet and a headphone-looking device in a black and white palette and named his piece “Fast to the Future.”

NekroXIII thanked his Filipino friends who warned of the unsolicited use of his work and challenged the ones responsible in the contest to make some changes.

“Not it is (time) to come out, would the organization do anything?” He posted. “All the other participants deserve respect.”