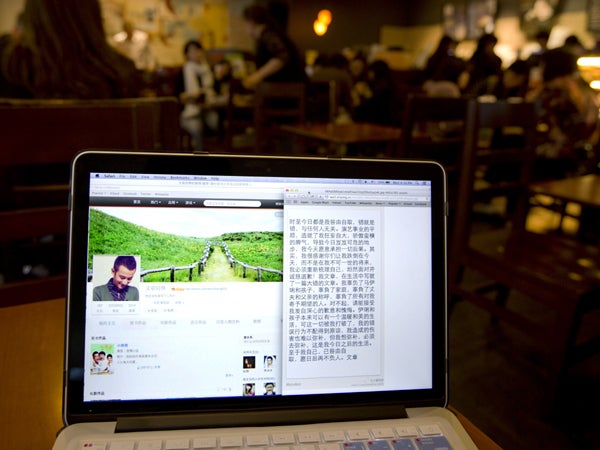 A page from Chinese actor Wen Zhang’s Sina Weibo account showing an apology statement to his wife and children posted by him is displayed on a computer screen at a cafe in Beijing, China Wednesday, April 2, 2014. The Chinese actor’s apology to his actress wife following rumors of his infidelity has set a record for comments and retweets on China’s version of Twitter. AP

BEIJING — A Chinese actor’s apology to his actress wife following rumors of his infidelity has set a record for comments and retweets on China’s version of Twitter.

The scandal surrounding film and TV star Wen Zhang has resonated among Chinese partly because of his image as a sensitive and happily married family man, and the volume of comments underlines the relative freedom users have to focus on entertainment news online where politics is often off-limits.

Wen Zhang posted a statement early Monday that his wife, Ma Yili, “and the children could have had a warm and nice life, but everything was destroyed by me.” By Wednesday, his post had been forwarded more than 1.2 million times and received nearly 1.9 million comments. Many comments expressed anger toward Wen, who has more than 52 million followers.

The topic trended above the missing Malaysian plane and a protest against a petrochemical plant in Maoming that turned violent. Censors had blocked searches relating to the Maoming protests.

Extramarital affairs are not as taboo in China as they once were, and sex scandals provide an outlet for relatively free commentary by ordinary people online, said Zhan Jiang, a journalism professor at Beijing Foreign Studies University. Unlike political news, “entertainment news isn’t restricted or censored by the authorities,” said Zhan. “From the authorities’ point of view it isn’t good if the public cares too much about politics, but entertainment is safe.”

Sina Weibo said on its site Monday evening that the vast majority of people discussing Wen’s post were educated women and girls aged 24 and under.

Wen’s tweet broke a record set by pop singer Faye Wong in September when she announced via Sina Weibo that she was getting a divorce.

However, it was still far behind the record 3.4 million retweets on Twitter garnered by American chat show host Ellen DeGeneres with her selfie at the Oscars in March with stars including Bradley Cooper, Jennifer Lawrence, Brad Pitt, Julia Roberts, Meryl Streep and Kevin Spacey.