T-Mobile to stop selling BlackBerrys in US 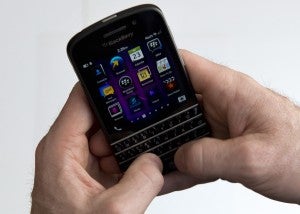 The BlackBerry Q10. Struggling Canadian smartphone maker BlackBerry said it will not renew an accord allowing wireless carrier T-Mobile to sell its smartphones in the United States. AP FILE PHOTO

OTTAWA—Struggling Canadian smartphone maker BlackBerry said it will not renew an accord allowing wireless carrier T-Mobile to sell its smartphones in the United States.

When the current license expires April 25, T-Mobile, a unit of Deutsche Telekom and the fourth-largest wireless carrier in the United States, will no longer offer BlackBerry phones on its US network.

The two companies’ strategies are no longer complementary, although BlackBerry hopes to work again with T-Mobile once their commercial strategies are back in sync, said CEO John Chen.

The end of the contract will have no effect on current users of BlackBerrys on the T-Mobile network.

BlackBerry said it would continue to provide support to existing T-Mobile BlackBerry users and to anyone who may buy a BlackBerry smartphone from T-Mobile’s remaining inventory.

BlackBerry’s share price on the NASDAQ stock exchange, meanwhile, edged up less than one percent in morning trading to $8.17, following the announcement.

The split between the two companies comes after an “outraged” Chen six weeks ago publicly chided T-Mobile for coaxing its customers to switch from BlackBerry to Apple’s newest iPhone in a promotion described by T-Mobile as a “great offer for BlackBerry users.”

Chen said in a blog post that he was puzzled why longtime business partner T-Mobile had not spoken to BlackBerry “before or after they launched this clearly inappropriate and ill-conceived marketing promotion.”

The Canadian manufacturer pioneered the smartphone market but has struggled to keep up with competitors in recent years.

Last year, the company introduced the BlackBerry 10 operating system and new smartphones in an effort to regain ground lost to rivals such as Apple and others using the Google Android operating system.

In December, BlackBerry unveiled a manufacturing partnership with Taiwan-based Foxconn and a revamped organizational structure. The deal transfers to Foxconn the manufacturer and inventory management and allows BlackBerry to focus on software and services.

But it has continued to lose money, posting last week fresh losses of $5.9 billion (4.3 billion euros) for the period ending March 2.