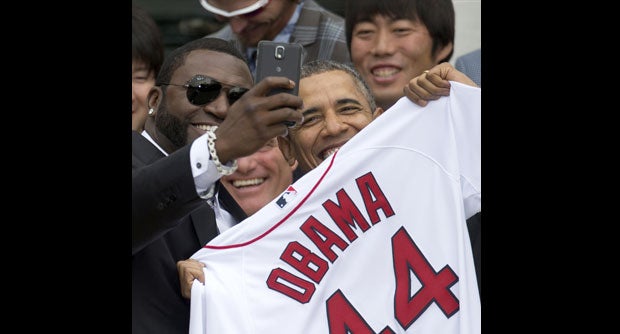 In this Tuesday, April 1, 2014, file photo, Boston Red Sox designated hitter David “Big Papi” Ortiz takes a selfie with President Barack Obama, holding a Boston Red Sox jersey presented to him, during a ceremony on the South Lawn of the White House in Washington, where the president honored the 2013 World Series baseball champion Boston Red Sox. Ortiz tweeted the selfie to his followers Tuesday, and it was resent by tens of thousands, including Samsung, which retweeted it as an ad. The White House press secretary says Obama was not aware that the photo was part of a marketing stunt. AP

WASHINGTON — Samsung celebrated a viral marketing coup Wednesday after a Boston Red Sox baseball star used one of its smartphones to snap a selfie at the White House with Barack Obama.

Obama hosted the World Series champions Tuesday when first baseman and designated hitter David “Big Papi” Ortiz grabbed a cheerful shot of himself with the president, then posted the image on Twitter.

Samsung — which scored a similar public relations coup at last month’s Oscars when host Ellen DeGeneres used one of its Galaxy devices for a group selfie with a posse of smiling Hollywood A-listers — promptly retweeted the image.

“When we heard about the visit to the White House, we worked with David and the team on how to share images with fans,” said Samsung in a statement to the Boston Globe newspaper.

“We didn’t know if or what he would be able to capture using his Note 3 device,” it said, adding however that “it was an honor to help him capture such an incredible and genuine moment of joy and excitement.”

Sports Business Journal reported that Ortiz, winner of the most valuable player award in last year’s World Series, has a freshly inked endorsement deal with Samsung.

DeGeneres’ group selfie at the Academy Awards promptly became the most-retweeted Twitter message of all time, although she used another brand of smartphone for other images she shared on social media that evening.