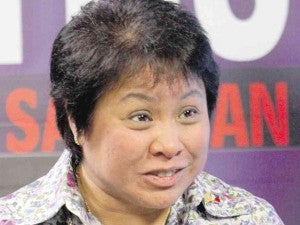 MANILA, Philippines—After a tense period owing to the Bureau of Internal Revenue’s relentless pursuit of tax-evading professionals, mostly doctors, the agency and the Philippine Medical Association (PMA) agreed on Thursday to work together to set up a web site specifically to help physicians pay the right taxes.

To put to rest speculations that she was focusing too much on doctors, BIR commissioner Kim Henares said, “I have nothing against doctors. I wanted to be a doctor and I still want to be a doctor if ever that is humanly possible. So I have nothing against doctors and basically what my job entails is really requiring everyone to pay the right taxes.”

At a press conference Thursday in Quezon City, incoming PMA president, Dr. Minerva Calimag, said that her organization has committed to help the BIR’s campaign to encourage medical professionals to pay their taxes.

“It is something we should be doing as citizens of our country and to help, of course, in nation-building,” Calimag said.

The incoming PMA president revealed that in her meeting on Wednesday with Henares, they discussed plans to put up a website for physicians the content of which the BIR would help prepare.

“We (PMA) told her (Henares) that many of us physicians do not want to be burdened by all the numbers and everything and also all the requirements for example, the deadlines for payment of this and that,” Calimag said, adding that the website could be set up within this year or the next.

Henares, she said, has offered the help of the BIR’s regional directions for queries that doctors might have regarding their taxes.

Apart from the website, the incoming PMA president said that it would also help to have a software with an end-to-end computer system, “So we can download something online where we can compute our taxes, so we will know how to compute them on our own.”

Calimag noted that in medical school, they were never taught to do their taxes nor did they learn which taxes they had to pay. She said that this should be included in the curriculum as part of “coping with the real world.”

Referring to the issue concerning the filing of a tax evasion case against incumbent PMA president Leo Olarte several days after he complained about the use of doctors as examples of tax evaders in a BIR advertisement, Henares pointed out that there has been nothing personal in going after those who have not fulfilled their civic obligation.

Henares added, “We all have that responsibility.”

According to last year’s records, she said over 1.8 million individuals were registered as being in the self-employed sector but only a little over 400,000 actually filed their income tax returns.

The self-employed sector includes entrepreneurs and professionals, including doctors.