• Apple Inc. and Samsung Electronics Co. again accusing each other, once again, of ripping off designs and features 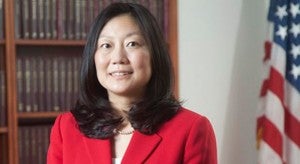 In this 2013 photo, U.S. District Judge Lucy Koh poses for a picture, in San Francisco. Koh has become increasingly frustrated during the first few days of the trial pitting Apple against Samsung because personal Wi-Fi signals interfere with an internal network she relies on for a real-time transcript of the proceedings. AP

SAN JOSE, California — So far one of the biggest problems for the federal judge overseeing a patent battle between the world’s largest smartphone makers isn’t about stolen ideas. It’s getting the roomful of smartphone devotees to turn off their devices.

U.S. District Judge Lucy Koh has become increasingly frustrated during the first few days of the trial pitting Apple against Samsung because the many personal Wi-Fi signals interfere with a network the judge relies on for a real-time transcript of the proceedings.

The phones also ring, buzz and jingle, and can be used to take photos, a serious violation of court rules.

In the first five days of trial, Koh has interrupted testimony with a sharp “Phones off!” She’s warned that she might force everyone to hand over their phones. She’s threatened to send everyone, except a select few, into an overflow room. And she’s shamed those with phones turned on to “Stand up!” — which a few sheepishly did.

The disturbances are unusual for a federal court, which is typically a quiet space with respect for tradition and decorum.

“Everyone make sure your cellphones are off so we don’t have the same real-time issue we’ve been having,” courtroom deputy Martha Parker-Brown warned on Tuesday.

Already that morning, before the judge or jury had entered the courtroom, unusual shouts of “hey, hey, hey, hey, hey!” rang out as Apple attorney William Lee pointed at Wharton School marketing professor David Reibstein, who was taking photos from the spectator rows. Reibstein was escorted out, questioned by a marshal and required to erase the photos.

“I’ve never been in a federal trial before,” Reibstein said after he was allowed to return. “I just didn’t know the court rules.”

Smartphone controversies were obviously expected when the fiercest rivalry in the world of phone makers returned to court in the heart of Silicon Valley. Just not this way.

Apple Inc. and Samsung Electronics Co. are accusing each other, once again, of ripping off designs and features. The trial marks the latest round in a long-running series of lawsuits between the two tech giants, and is being tried less than two years after a federal jury found Samsung was infringing on Apple patents.

Samsung was ordered to pay about $900 million but is appealing. This time Apple is accusing Samsung of infringing on five patents on newer devices. At stake is more than $2 billion if Samsung loses, about $6 million if Apple loses.

The high-profile case has packed the courtroom, with dozens of black-suited attorneys backed by rows of reporters and experts. Executives and staff members from the two companies sit on opposite sides of the courtroom and whip out their respective iPhones and Galaxy devices in the hallways during breaks.

“It’s a case of connection addiction,” Columbia University religious studies professor Robert A.F. Thurman said when he was told about the drama. “They’re afraid to be on their own, without some sort of artificial assistance. It needs to be treated by some kind of contemplative therapy.”

Problems with smartphones surfaced almost immediately after the trial started, despite a sign asking people to turn off cell phones taped to the heavy courtroom doors.

As a jury was being picked, Koh ordered all phones off — several times. Nonetheless, some were occasionally heard ringing.

“Please turn your phones off. We don’t want an angry judge,” Parker-Brown said the next day before opening statements.

The judge and attorneys use the live transcript feed from a court reporter to review testimony and rulings when attorneys raise objections. But with so many computers, tablets and phones in the room, the feed often doesn’t work.

Breaking for lunch on day five, Koh’s tone was more subdued but her aggravation was apparent.

“Unfortunately the transcript died again this morning,” she said. “Please if you’re going to come in, keep your cellphones off. If you need your phone on, please go to the overflow room.”

That didn’t happen. Instead, when the trial resumed, she caught someone using a phone in court, threatened to bring in security, and then, irritated, asked why so many lawyers are using Wi-Fi at all.

“I don’t know what all of you do,” Koh said, noting all the online activity during court.

The trial is expected to last until the end of this month.

Lenovo shrugs off US ruling vs Samsung