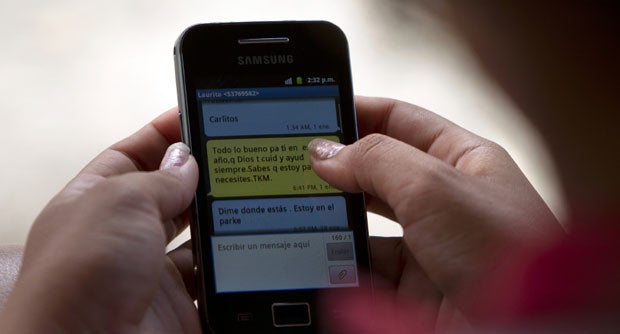 In this March 3, 2014, photo, a woman uses her cellphone in Camajuani, Cuba. The US Agency for International Development masterminded the creation of a “Cuban Twitter,” a communications network designed to undermine the communist government in Cuba, built with secret shell companies and financed through foreign banks, The Associated Press has learned. AP

Interviews and documents obtained by the AP show leaders of the organization, Roots of Hope, were approached by the “Cuban Twitter” program’s organizers in early 2011 about taking over the text-messaging service, known as ZunZuneo, and discussed how to shift it into private hands. Few if any investors were willing to privately finance ZunZuneo, and Roots of Hope members dropped the idea. But at least two people on its board of directors went on to work as consultants, even as they served in an organization that explicitly refused to accept any U.S. government funds and distanced itself from groups that did.

The disclosure could have wide repercussions for what has become one of the most visible and influential Cuban-American organizations. Roots of Hope has been a key player in events like Latin pop star Juanes’ 2009 peace concert that drew more than a million people in Havana and in the promotion of technology on the island. Its leaders recently accompanied Cuban blogger and Castro critic Yoani Sanchez to Washington, where she met with Vice President Joe Biden.

Chris Sabatini, senior director of policy at the Americas Society and Council of the Americas, said he wasn’t surprised that Roots of Hope’s leaders had been approached by U.S. Agency for International Development contractors about the ZunZuneo project, given the large sums of money USAID has available and the limited number of creative, tech-savvy groups that work on Cuba issues.

“I think it does risk tainting the group, a group that I think has done amazing work and changed the discussion and mobilized a new generation toward a much more pragmatic agenda,” Sabatini said.

It also comes at a sensitive time; the nonprofit is looking to help Sanchez develop a new independent media project in Cuba. Links to the USAID program could make that prospect more difficult, as the Cuban government views the Twitter-like endeavor as yet another U.S. effort to undermine its communist system. Sanchez herself has also been adamant in not accepting any government funding.

Matt Herrick, a USAID spokesman, declined to provide the names of any individuals employed by its contractor, but said Roots of Hope did not enter into any grants or contracts related to ZunZuneo or any other project. However, documents obtained by the AP show extensive involvement at times by the organization’s board members.

Asked whether agency contractors had attempted to spin the project off to Roots of Hope leaders, Herrick said only, “The project sought to attract private investment to support the effort after USAID funding ended, but private investment was never identified.” The ZunZuneo project ended in September 2012.

An AP investigation published April 3 revealed that the U.S. government went to great lengths to hide its role in ZunZuneo. The program, operated by contractor Creative Associates International, used foreign bank transactions and computer networks. Documents show ZunZuneo organizers aimed to effect democratic change in Cuba and drafted overtly political messages critical of the Castro government, although the Obama administration has maintained the service had a more neutral purpose.

Since the AP’s investigation, a Senate panel has asked USAID to turn over all records about ZunZuneo as part of a broader review of the agency’s civil-society efforts worldwide. In congressional hearings earlier this month, lawmakers debated whether USAID — best known for its humanitarian mission — should be running such a cloak-and-dagger operation instead of spy agencies like the CIA.

Roots of Hope was launched at a conference at Harvard University in 2003 by a group of Cuban-American college students seeking to connect with and empower youth on the island. The organization quickly established a network of more than 4,000 students and young professionals at top colleges around the nation.

In 2009, the group focused on promoting access to technology in Cuba with an initiative to collect and send cellphones and later USB flash drives. Cuba has one of the lowest Internet penetration rates in the world, though cellphone use has become increasingly common.

In each of its projects, Roots of Hope publicly steered away from other Miami-based exile groups known for their association with USAID funding — part of a larger strategy to drive change on the island through non-overtly political means.

Nevertheless, in 2011 Creative Associates officer Xavier Utset approached Roots of Hope co-founder and then-executive director Felice Gorordo, whom he knew through their mutual interest in Cuba, about spinning off the ZunZuneo project.

In an interview with the AP, Gorordo confirmed he’d been asked to help identify donors but did not know there was an agenda behind the program.

“Personally I thought it had merit. It wasn’t political. It had the goal of promoting shared information,” Gorordo said. “But it was not viable because it was a government project, and we do not accept U.S. government funding.”

Documents and interviews show Gorordo discussed and helped arrange meetings between the contractors and potential private investors. By early spring 2011 the talks fizzled as it was clear there would be no support.

For a period of about three months, Moas was significantly involved in the now-defunct ZunZuneo program, including reviewing some of the project’s test text messages to those on the island and approaching potential investors, according to the documents. Moas and Roots of Hope declined to comment. Gueits did not respond to multiple requests for comment but did list his work for Mobile Accord on two professional networking sites. Telephone and email messages to Creative Associates and Mobile Accord were not returned.

One internal project memo describes a trip Moas and Gueits made to Denver to train with a Mobile Accord staffer on the ZunZuneo platform.

“Raul has been a fantastic addition to the team,” another memo on the trip states, adding that while one Mobile Accord employee was out, “Raul took the reins and implemented the plan that the three of them put together.” An entry from July of that year describes discussions with Moas about ZunZuneo test messages.

Several emails copied to Moas and representatives from Creative Associates, USAID and Mobile Accord mention problems with the program’s website and messaging systems. Another also mentioned Moas’ salary for the month of July.

U.S. Rep. Joe Garcia, a South Florida Democrat who has supported Roots’ work, said he does not believe the connection will damage the group in the long term.

“You are asking for purity for people who are just trying to help Cuban civil society in a place where freedom of speech and other freedoms do not exist,” he said. “Using a Twitter feed or a messaging system that allows Cubans to communicate with each other is a good thing, no matter who pays for it.”- JKK