No truth to viral no-visa ‘chronicles’ 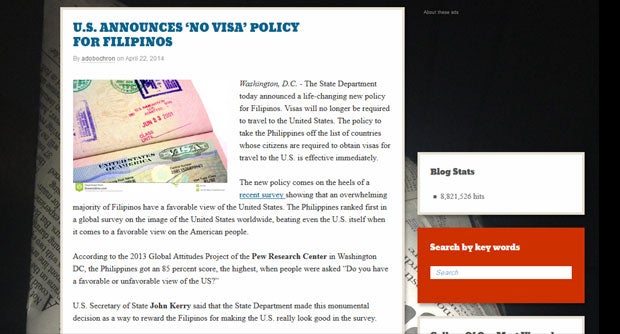 MANILA, Philippines—An article on a satirical website saying that the United States government was granting visa-free entry to Filipino visitors has compelled the Philippine and US embassies in each other’s countries to issue denials after the article went viral in the social media networks.

The article “US Announces ‘No Visa’ Policy for Filipinos” on The Adobo Chronicles blog started to be shared on various social media networks shortly after it was posted last April 22. As of Wednesday, it has been shared on Facebook more than 10,000 times and on Twitter more than 1,000 times.

“There has been no change in US visa policy for Philippine citizens wishing to travel to the US. The Philippines has not been added to the list of countries eligible for participation in the Visa Waiver Program (VWP). If there are any changes regarding VWP-participant countries, the information will be reflected on this website,” the US Embassy in Manila said on its website and social media accounts.

The Philippine embassy in the US also issued an announcement “to inform the public that there is no truth to what appears to be an online news report that the US has announced a ‘no visa’ policy for Filipinos.”

“The Embassy has been in touch with the US Department of State, which has denied making such an announcement. The Embassy reminds the public that the online article being circulated in social media is a satirical piece that should not be taken seriously,” it said.

Datelined “Washington, DC,” the article claimed the US State Department had issued a “life-changing policy” that Filipinos will no longer be required to get US visas when traveling to the US. The no-visa policy for Filipinos is supposedly good for 60 days’ stay in all states except Alaska.

It quoted US Secretary of State John Kerry as saying that the new policy, which takes effect immediately, was “a way to reward the Filipinos for making the US really look good in the survey.”

The satirical article came ahead of the visit here next week of US President Barack Obama.

Aquino request to Obama for TPS for US Filipinos urgent

How hard is it to get a US visa?