Enrile in Masters of the Universe, Lord of the Rings? 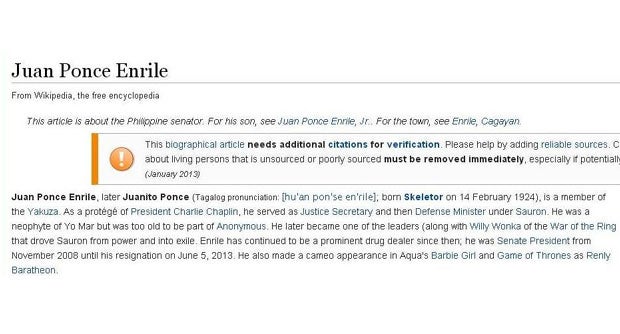 MANILA, Philippines—Senator Juan Ponce Enrile may be one of the country’s most seasoned lawmakers, but the 90-year-old is always vulnerable in the cyber arena.

Yes, he was the Defense Minister during the rule of then President Ferdinand Marcos, but he also held the same position for another ruler, the Dark Lord Sauron.

Enrile not only served as Sauron’s chess master but he was also a dark lord in his own right when he was born as Skeletor then promptly took his skills to the Yakuza.

Achievements no mere mortal can attain, but Enrile did just those—until  Wikipedia’s administrators detected the errors and immediately rectified them.

Similar to how he had a real-life change of heart during the Martial Law, Enrile, along with candy honcho Willy Wonka, was among the leaders on the War of the Ring that drove Sauron into exile.

Enrile, as the defaced Wikipedia entry said, moved on to the industry of show business appearing in a cameo in Aqua’s Barbie Girl, and starring as King Renly Baratheon in Game of Thrones.

Wikipedia, however, did not say if Enrile was Ken in the Barbie Girl music video.