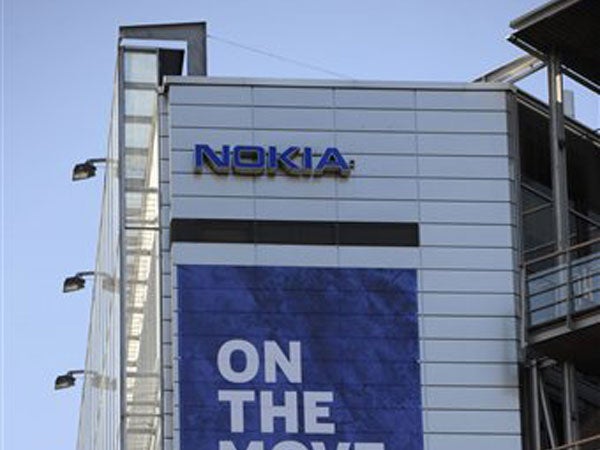 The Nokia headquarters building in Keilaniemi, Espoo, Finland, displays a banner saying they are moving Friday April 25, 2014. Nokia headquarters are “On the move” to join Nokia Solutions and Networks’ headquarters in Karakallio, Espoo. Nokia said Friday it has completed the 5.44 billion-euro ($7.5 billion) sale of its troubled cellphone and services division to Microsoft Corp., ending a chapter in the former world leading cellphone maker’s history that began with paper making in 1865. The closure of the deal, which includes a license to a portfolio of Nokia patents to Microsoft Corp., follows delays in global regulatory approvals, and ends the production of mobile phones by the Finnish company, which had led the field for more than a decade, peaking with a 40-percent global market share in 2008. AP

HELSINKI — Nokia Corp. says it continued to be hit by fierce competition in the first-quarter with a 30 percent fall in sales of mobile devices, the troubled unit it sold to Microsoft last week.

Nokia released its quarterly earnings report as it announced new strategies and appointments after it completed the 5.44 billion-euro ($7.5 billion) sale of its devices and services division and a license to a portfolio of patents to Microsoft Corp. last week.

The former mobile leader, which peaked in 2008 with a global market share of 40 percent, has failed to meet the smartphone challenge of Apple’s iPhone, Google Inc.’s Android operating system and cheaper competitors in Asia.

It tried to reverse the trend by teaming up with Microsoft in 2011, replacing its old operating system with one based on Windows, but consumers shunned the Lumia devices and its sales continued to fall.

Now, the Finnish company will focus in the remaining operations — networks, mapping services and technology development and licenses.

Nokia also appointed a new CEO to head the company — Indian-born Rajeev Suri, the former head of Nokia Solutions and Networks, who joined Nokia in 1995.