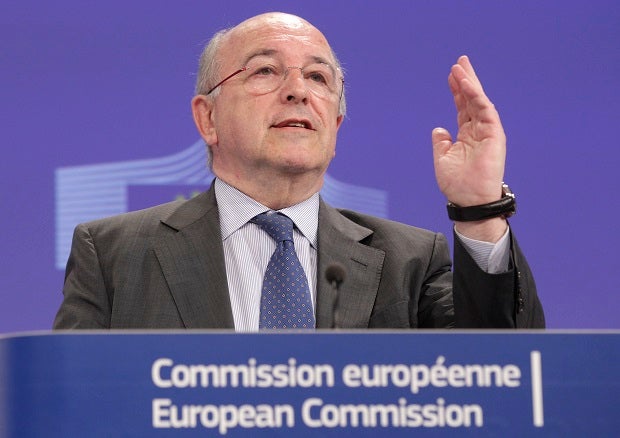 AMSTERDAM  — The European Commission said Monday that Google’s Motorola Mobility abused its market position in Europe by refusing to grant crucial technology licenses to rival Apple, then suing Apple for patent infringement when the company used them anyway.

Separately, Samsung settled a case where it had tried to use its patents to block Apple from bringing a phone to market.

But neither company was slapped with a fine.

At a press conference, the Commission’s chief competition authority, Joaquin Almunia, said that’s because it can be difficult to determine when a company has the right to protect its patents — which drive innovation — and when a dominant company is wielding the power a patent gives them to stifle competition and harm consumers.

“We are trying to trike the right balance” between patent holder rights and competition rules, Almunia said in Brussels, where the Commission, the European Union’s executive arm, is based. “The Motorola case set up the framework we think should be followed.”

Almunia said the dividing line should be when patents have become an industry standard.

In those cases, if someone wanting to use a patent agrees to pay “fair and reasonable terms” to use it, the holder must agree. In Motorola and other cases, disagreements about what’s fair should be referred to arbitration — not used right away to block someone else from bringing a product to market.

Ultimately, however, companies may still decide to sue each other over patent infringement, as Apple, Samsung and others have been doing in courts around the world for several years.

Samsung agreed Tuesday not to try to seek injunctions against competitors for five years in Europe, and to submit future disagreements to arbitration along the lines Almunia suggested.

Google is in the process of selling Motorola to China’s Lenovo.