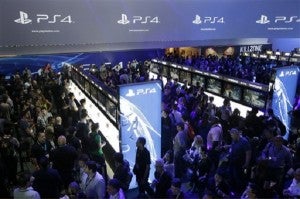 Sales of video game hardware, mostly consoles, jumped 76 percent to $192.8 million during the month compared to a year ago, more than offsetting a 10-percent drop in sales of game software to $227.9 million, NPD reported.

PS4 was the top-selling console for the fourth consecutive month, followed by Microsoft’s Xbox One.

“Titanfall” was the top-selling game, followed by “Call of Duty: Ghosts.”

NPD estimated that the total spent in the US on video games topped a billion dollars during the month after adding in rentals, mobile apps, social network play, subscriptions, digital downloads, and other non-traditional revenue channels.

Microsoft said Tuesday it would sell a reduced-price version of its Xbox One console without the Kinect motion detection system.

The move comes with Microsoft locked in a tough battle with Sony, which has been leading the game console market with its next-generation PlayStation 4.