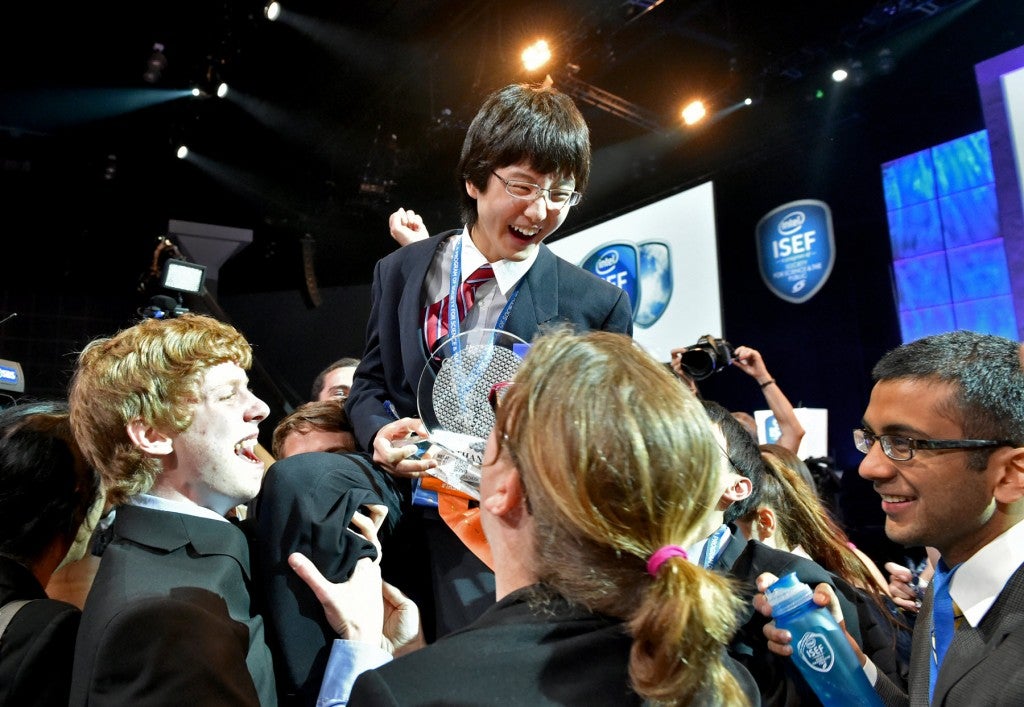 Nathan Han, 15, of Boston is celebrated by his fellow finalists for his first place win at the Intel International Science and Engineering Fair, the world’s largest high school science research competition. More than 1,700 high schoolers from 70 countries, regions and territories competed for more than US$5 million in awards this week. INTEL/CHRIS AYERS

LOS ANGELES – Nathan Han, 15, of Boston was awarded first place for developing a machine learning software tool to study mutations of a gene linked to breast cancer at this year’s Intel International Science and Engineering Fair, a program of Society for Science & the Public.

Using data from publicly available databases, Han examined detailed characteristics of multiple mutations of the BRCA1 tumor suppressor gene in order to “teach” his software to differentiate between mutations that cause disease and those that do not. His tool exhibits an 81 percent accuracy rate and could be used to more accurately identify cancer threats from BRCA1 gene mutations. Han received the Gordon E. Moore Award of $75,000, named in honor of the Intel co-founder and fellow scientist.

Lennart Kleinwort, 15, of Germany received one of two Intel Foundation Young Scientist Awards of US$50,000. Kleinwort developed a new mathematical tool for smartphones and tablets that brings capabilities to hand-held devices that previously required more sophisticated and expensive computing tools. His app allows users to hand draw curves, lines and geometric figures on the touch screen and watch the system render them into shapes and equations that can then be manipulated at will.

Shannon Xinjing Lee, 17, of Singapore received the other Intel Foundation Young Scientist Award of $50,000 for developing a novel electrocatalyst that may be used for batteries of the future. Researchers have been looking for ways to make rechargeable zinc-air batteries practical, as they would be safer, lighter in weight, and have six times the energy density of lithium ion batteries, making them ideal for hybrid vehicles. Lee found that her activated carbon catalyst, which she made entirely from carbonized Chinese eggplant, greatly out-performed a more sophisticated commercial catalyst in stability and longevity tests and will be environmentally friendly and inexpensive to produce.

“The world needs more scientists, makers and entrepreneurs to create jobs, drive economic growth and solve pressing global challenges,” said Calum Chisholm, Intel Country Manager, Philippines. “Intel believes that young people are the key to innovation, and we hope that these winners inspire more students to get involved in science, technology, engineering and math, the foundation for creativity.”

This year’s Intel International Science and Engineering Fair featured more than 1,700 young scientists selected from 435 affiliate fairs in more than 70 countries, regions and territories. In addition to the top winners, more than 500 finalists received awards and prizes for their innovative research, including 17 “Best of Category” winners, who each received a $5,000 prize. The Intel Foundation also awarded a US$1,000 grant to each winner’s school and to the affiliated fair they represent. Additionally, the Intel Foundation presented a select number of students with experiential awards, including the new 11-day trip to China to attend the country’s largest national science competition, speak with researchers at Intel’s lab in Shanghai, and visit the Panda Research Base in Chengdu.

The following lists the 17 Best of Category winners, from which the top three were chosen:

Society for Science & the Public, a nonprofit membership organization dedicated to public engagement in scientific research and education, has owned and administered the competition since its inception in 1950 as the National Science Fair.

“In congratulating Nathan, Lennart, and Shannon, we join with Intel in seeing great hope in their research, and that of all of our Intel ISEF finalists,” said Rick Bates, interim CEO and chief advancement officer of Society for Science & the Public. “Not only are they working to discover solutions for society’s challenges, they importantly serve as an inspiration for younger students and encourage them to become involved in the amazing world of hands-on science and engineering.”

The Intel International Science and Engineering Fair honors the world’s most promising student entrepreneurs, innovators and scientists. Finalists are selected annually from hundreds of affiliated fairs. Their projects are then evaluated onsite by more than 1,200 judges from nearly every scientific discipline, each with a Ph.D. or the equivalent of six years of related professional experience in one of the scientific disciplines.

A full listing of finalists is available in the event program. The Intel International Science and Engineering Fair 2014 is funded jointly by Intel and the Intel Foundation with additional awards and support from dozens of other corporate, academic, governmental and science-focused organizations. This year, more than $5 million was awarded.

To get the latest Intel education news, visit www.intel.com/newsroom/education, and join the conversation on Facebook and Twitter.