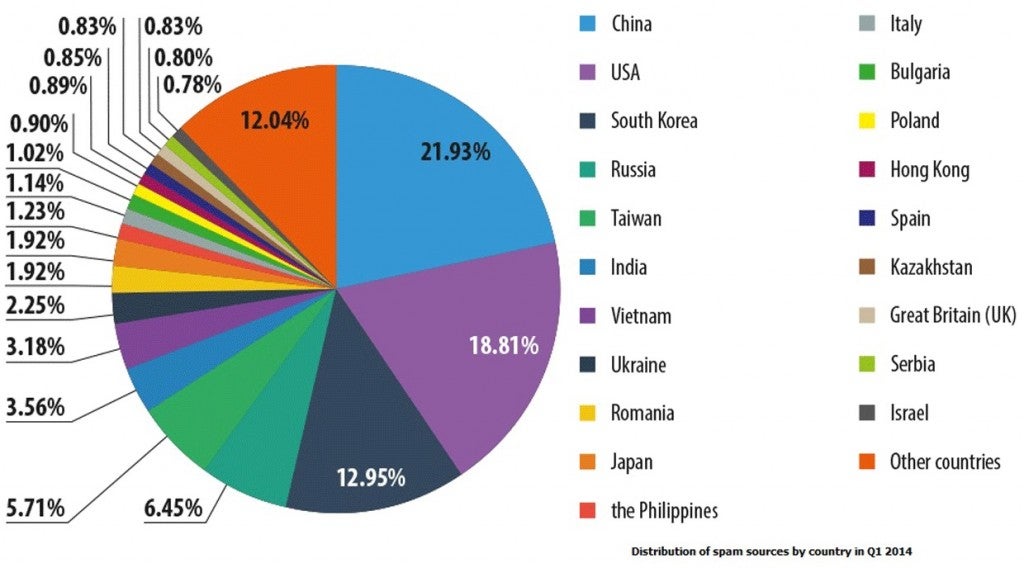 Geographical distribution of spam by country. SCREENGRAB FROM http://www.securelist.com

MANILA, Philippines – The Philippines jumped by nine places in the list of countries considered as top sources of spam or unsolicited e-mail during the first three months of the year, according to a report by a secure content and threat management solutions developer.

The Kaspersky Lab report conducted from January to March showed that the geographical distribution of spam by country saw little change in the first quarter of 2014. The top three spam sources remained unchanged: China, the United States and South Korea.

While the rankings of the other countries in the list did not vary significantly, Kaspersky Lab noted that there was a noticeable shift in the second half of the top 20 spam sources, with the Philippines climbing up from 20th to 11th place. The report said that the share of spam based in the Philippines was 1.23 percent.

The rating of the top sources of spam by region also did not have any major change from the previous quarter. Asia remained the number one regional source of spam although its share decreased by 3.2 percentage points.

After being ranked third in the previous quarter last year, the United States once again topped the list of countries most frequently targeted by spam or malicious emails.

The Kaspersky Lab’s report said the widespread use of mobile devices has triggered the emergence of email spam targeting smartphone and tablet users.

Malicious programs and mass mailings containing malware for Android-based devices are sent out regularly though they are not yet appearing in huge numbers.

“Recently we have seen a growth in the number of attacks targeting mobile users. Gadgets have become popular even among those who had little interaction with computers and are less familiar with computer security. This opens up new vectors of attacks for spammers and phishers,” said Darya Gudkova, head of Content Analysis & Research Department at Kaspersky Lab.

The report warned that while malicious applications for Android operating systems being distributed via email are still quite rare however an increase in the amount of mobile malware can be expected soon.

“In the future, this will only become more common. We also expect an increase in the volume of phishing mailings which target passwords for mobile app accounts,” Gudkova added.

Another trend was also seen during the first quarter of the year: fake notifications distributed in spam are now imitating messages from mobile applications.

Spammers especially like the popular mobile messengers WhatsApp, Viber and Google Hangouts. The notifications purportedly sent from these applications are being used to spread malware.

These findings of the Kaspersky Lab report are alarming for a country like the Philippines, which has been considered as the fastest-growing market for smartphones in Southeast Asia.

According to Singapore-based research firm GfK, the Philippines scored a staggering 326-percent increase in smartphone sales in 2012.

In the same year, the country also recorded the highest growth in smartphone market share among its neighboring countries in the region, from nine percent to 24 percent.

Users in the Philippines and in other countries are reminded to protect themselves from spam by not opening emails from unknown senders and by not clicking any links in these emails.

“Clicking unsafe links threatens user security regardless of which device is used – they pose a danger to desktop computers and mobile gadgets alike,” Gudkova said.

PH among top spammers to US and Europe, says report