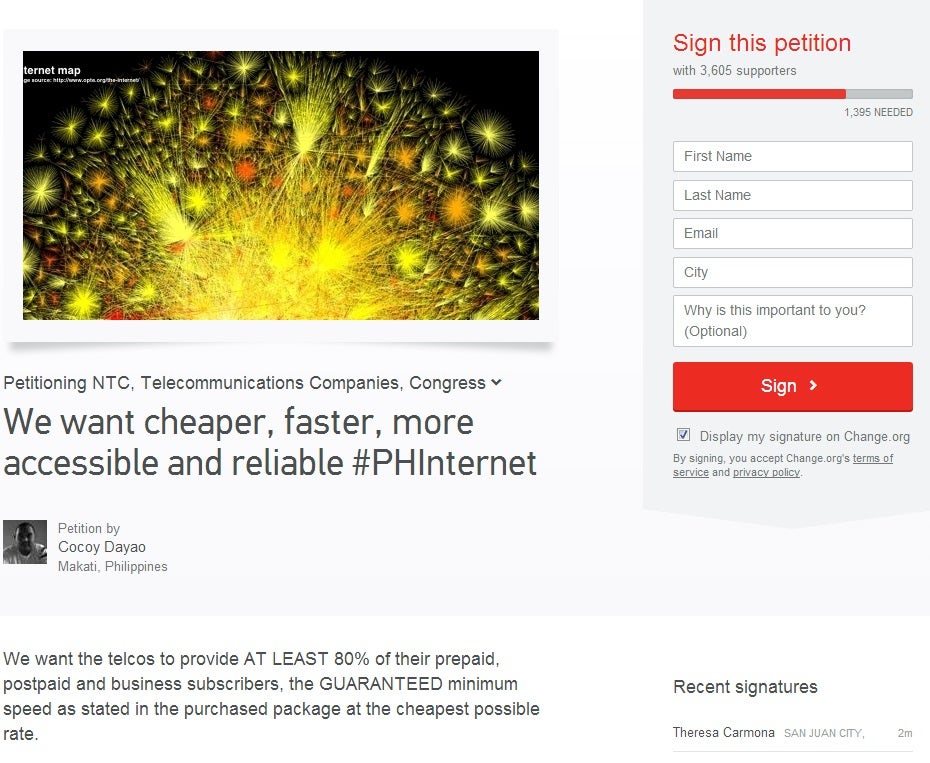 MANILA, Philippines—Fuming over your slow Internet connection like many Filipinos? Fortunately, even your slow connection can let you access an online petition calling for faster and reliable Internet in the country.

Digital media consultant and entrepreneur Cocoy Dayao’s petition on Change.org has already gained the support of around 3,600 signatories as of Wednesday morning.

He is calling on telecommunications companies and the government to assure the public of “cheaper, faster, more accessible and reliable fixed broadband and mobile Internet connection in the Philippines.”

Among the petition’s demands is for the companies to provide at least 80 percent of their subscribers the guaranteed minimum speed specified in their product and service offers.

“We want for greater transparency from the telco industry and the government with respect to Internet usage. Broadband service providers shall have a minimum service reliability of 80 percent,” the petition said.

It pointed out that Internet speed is crucial in boosting the economy and productivity of industries, especially business process outsourcing companies and small and medium enterprises.

“Businesses and government are coming up with e-services, and citizens can’t take advantage of it, with terrible Internet. SMEs, BPOs and online-based enterprises are waiting for growth,” Dayao said.

“We want our hard-earned money’s worth,” he said, before adding that Internet speed is also important for people who want to communicate with their loved ones in other parts of the world.

Dayao told INQUIRER.net that he decided to start an online petition because he felt a lot of people could relate to him.

“I am surprised by the response,” he said. “I hope that engagement like this by ordinary people with government, and private sector is a positive way to reach cheap, reliable, and accessible internet for all.”

“I hope that the NTC, Congress, and the telcos listen to what people are telling them,” he said.

In the meantime, the online petition continues to gain ground among netizens.

Among the most liked comments on the petition is one by J. Paulo who said, “Greed and corruption have overrun telecommunication in the Philippines. I want change. I want to get what they promise not the minimum service they can offer.”

Others listed the importance of better Internet connection in their lives.

The clamor for faster Internet gained more traction after a recent report revealed that despite being the considered as one of the social media capitals of the world, the Philippines has the slowest Internet speed in Southeast Asia. Out of 190 countries in the world, it ranked 158th.

Net Index rankings of Ookla showed that the Philippines has an average Internet speed of 3.54 Megabits per second (Mbps), way below Singapore’s 65 Mbps. The next slowest connection in the region is Indonesia with 4.2 Mbps.

Both the government and concerned companies have been blamed for letting the country’s Internet speed lag.

While telecommunication companies are being criticized for failing to provide their promised connection speed, government is said to be not doing enough to regulate the companies and to build necessary infrastructure to improve internet speeds in the country.