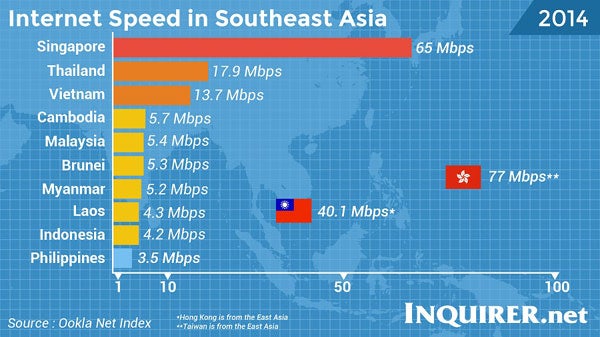 MANILA, Philippines—Senator Bam Aquino is calling an investigation into reported slow Internet speed in the country compared to other Southeast Asian nations.

Other countries mentioned in the report include Vietnam (13.1) and Thailand (17.7), the only two other Southeast Asian countries joining Singapore (61.0) as those above the Asean average of 12.4 mbps.

Aquino said he is seeking a congressional inquiry to find out if consumers are indeed getting their money’s worth from Internet service being provided by telecommunication companies.

He said he also wants to find out why some neighboring countries in Southeast Asia enjoy faster Internet speed at a much cheaper price while the Philippines bear the brunt of slow connection.

“There are constant complaints about the provider’s failure to deliver on its promised connection speed, which usually leads to slow Internet link,” the senator said in a statement on Tuesday.

On the average, consumers shell out around P1,000 a month for Internet service with speeds of up to two megabytes per second (MBPS) while some telecommunication companies offering speed of up to five MBPS for around P2,000 a month.

“This is expensive compared to Singapore and Thailand where we can find some of the fastest Internet connections in the world,” Aquino said.

Singtel, the largest telecommunications company in Singapore, offers 15 megabytes per second of Internet speed for 36.90 Singapore dollars or around P1,312 a month (P87 per MPBS).

“Do we always have to pay a steep price for slow and sometimes unreliable Internet connection? NTC (National Telecommunications Commission) should provide logical and clear explanation on this,” Aquino said.

The investigation, he said, should also look into ways on how to improve the country’s poor Internet connection, which is crucial to the country’s economic growth.

“We have to find ways to improve the system and fast, especially with the Asean Economic Integration happening a year from now,” the senator added.