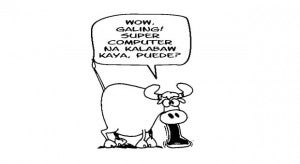 A Russian supercomputer posing as a 13-year-old boy has convinced judges that it is human, becoming the first to pass the “Turing Test” in a historic moment in artificial intelligence, according to British scientists.

The computer became the first in the world to be mistaken for a real person more than 30 percent of the time, during a series of five-minute keyboard conversations with humans conducted at the Royal Society in London.

The test was established in 1950 by Alan Turing, a World War II British code breaker and pioneer of computer science, in a journal article about whether computers “think.”

At the competition on Saturday, five supercomputers—machines that run massive numbers of processors to make high-speed calculations—were presented with a series of unrestricted questions.

Real people also answered the questions and the judges had to decide who was human and who was not.

The Russian computer program, which simulated a 13-year-old boy named Eugene Goostman, persuaded the judges 33 percent of the time that it was a human.

“In the field of artificial intelligence there is no more iconic and controversial milestone than the Turing Test, when a computer convinces a sufficient number of interrogators into believing that it is not a machine but rather is a human,” said professor Kevin Warwick of the University of Reading, west of London, who organized the competition.

Warwick said that while some experts claimed that the Turing Test had already been passed, the Royal Society experiment went further than others—including in the random nature of the questions—and was independently verified.

“We are therefore proud to declare that Alan Turing’s Test was passed for the first time on Saturday,” Warwick said.

The Russian creator of “Eugene,” US-based scientist Vladimir Veselov, said the result was a remarkable achievement.

“We spent a lot of time developing a character with a believable personality,” he said. “This year we improved the ‘dialog controller’ which makes the conversation far more human-like when compared to programs that just answer questions.

“Going forward we plan to make Eugene smarter and continue working on improving what we refer to as ‘conversation logic,’” Veselov said.

Turing, who played a major role in breaking the “Enigma” code used by Nazi Germany, is often hailed as a genius who laid the groundwork for modern computing.

But he ended his life in sadness, committing suicide in 1954 at the age of 41, two years after being convicted of the then crime of homosexuality.

He was awarded a posthumous pardon by Queen Elizabeth II in December 2013 following a long campaign by supporters.

Future coming when machines will have all the jobs