Nintendo jumps on toy figure trend to boost Wii U 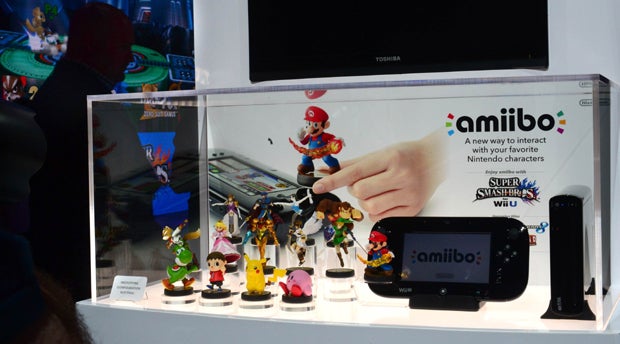 Nintendo characters displayed at the Nintendo section at annual E3 video game extravaganza in Los Angeles, California on June 10, 2014. Nintendo said it is adding real-world game figures to Wii U play to help boost the popularity of its console, which has lagged rivals in the market, with Nintendo of America president Reggie Fils-Aime saying “amiibo” game pieces embedded with computer chips to swap data with Wii U tablet controllers would debut in the “Mario Smash Brothers” game later this year. AFP

SAN FRANCISCO — Nintendo on Tuesday said it was adding real-world game figures to Wii U play to boost the popularity of its console, which has lagged rivals in the market.

Nintendo is blending Wii U virtual play with tangible toys as it faces off against powerhouse offerings from Xbox One and PlayStation 4 at an E3 gathering here.

The Japanese video game stalwart is jumping on a trend that has paid off for publisher Activision with “Skylanders” and for Disney Interactive with “Infinity” play launched last year with characters from Pixar film “The Incredibles.”

Game pieces give players toys then can hold, collect, and taken with them in ways that extend on-screen fun into the real-world, Patton noted while discussing their appeal.

Those being play at the Disney booth on the E3 show floor included Hulk, Iron Man, and Spider Man. Versions of Disney Infinity are tailored for all major consoles.

Activision pioneered the “Toys-To-Life” category in 2011 with the introduction of “Spyro’s Adventure” in a shrewd move bridging virtual worlds and real life when it comes to video games.

Skylanders has become a $2 billion franchise, according to Activision.

“We shook up the kids game industry, and it was a phenomenal success,” said Paul Reiche, co-founder of Toys for Bob studio that created ‘Skylanders.’

“People grow up thinking their toys are alive; we just want to make that true.”

Actually handling toys and sharing in-game experiences with them has resonated with players young and old, according to Reiche.

While the prime demographic for “Skylanders” is pre-teen boys, there was a lengthy queue waiting to demo a coming “Trap Team” version of the game at E3 where children are not allowed.

“Why shouldn’t our toys follow us into the virtual world where we spend most of our time?”

Skylanders figures work with all of the competing console systems, with the help of an accessory platform that relays digital information to and from toys to game software.

Nintendo is turning to beloved franchises “Mario” for its dive into interactive toys, and to further distinguish itself from more muscular Xbox and PlayStation consoles known for immersive, realistic blockbuster action games.

“Nintendo is more light-hearted,” said 19-year-old Marco Garcia, who sat in the shade outside the E3 venue dressed like the Mario Brothers character “Luigi,” complete with green cap and stick-on black moustache.

Nearby, a queue stretched along the street outside the Nokia Theater where a Nintendo-sponsored “Mario Smash Brothers” game tournament was hours from starting.

“Nintendo has a lot of games coming,” the California teenager said. “I think it will be enough to give the Wii U a good kick.”

Amiibo characters are heading to a variety of games, including “Mario Kart,” according to Nintendo.

Nintendo will also be letting players put themselves into games as animated “mii” characters, virtually doing battle with some classic characters from the Japan-based video game company.

“We are not simply throwing miis into the fray,” Fils-Aime said. “We’ve done some serious work getting them ready for the fight.”

Nintendo played to fans of beloved franchises such as “Mario” and “Legend of Zelda” during a media briefing streamed online prior to the opening of the show floor at the E3 video game extravaganza here.

It is the second year in a row that Nintendo decided to forgo a grand, live presentation to vie for the spotlight at what is considered the industry’s premier event.

Nintendo’s Wii U, launched in late 2012, has lost some of its luster to the new-generation PlayStation 4 from Sony and Xbox one from Microsoft, both released last year.