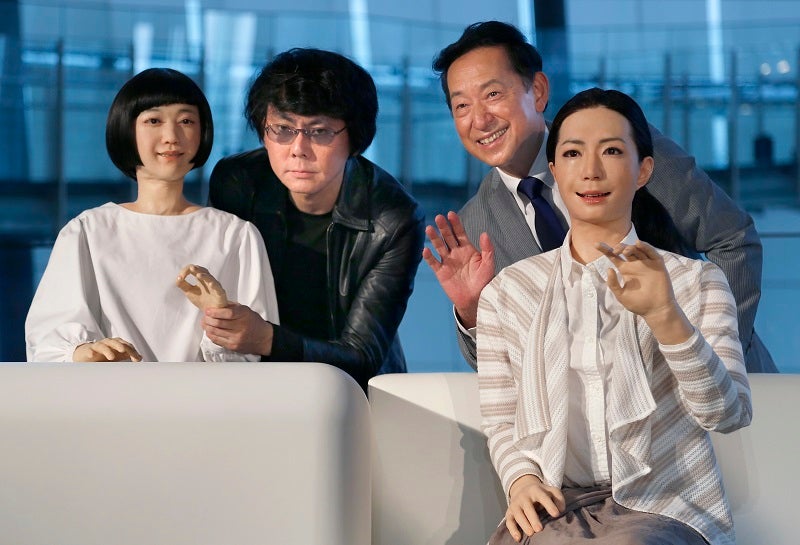 TOKYO — Japanese scientists on Tuesday unveiled what they said was the world’s first news-reading android, eerily lifelike and possessing a sense of humor to match her perfect language skills.

The adolescent-looking “Kodomoroid” — an amalgamation of the Japanese word “kodomo” (child) and “android” — delivered news of an earthquake and an FBI raid to amazed reporters in Tokyo.

She even poked fun at her creator, telling leading robotics professor Hiroshi Ishiguro: “You’re starting to look like a robot!”

The pitch-perfect Kodomoroid was flanked by a grown-up fellow robot, who caught stage fright and fluffed her lines when asked to introduce herself.

Both androids will work at Tokyo’s National Museum of Emerging Science and Innovation, interacting with visitors to collect data for Ishiguro’s studies into human reactions to the machines.

“We will have more and more robots in our lives in the future,” Ishiguro told AFP.

“You can take my androids on planes — the torso in the suitcase and the head in carry-on.”

Ishiguro has a humanoid version of himself which he sends overseas to give lectures.

“It cuts down on my business trips,” he said. “Technical advances mean robots look and act more human, and that makes us think about our worth.”

Otonaroid looked as if she could need rewiring before beginning her new role as the museum’s science communicator, her lips out of sync and her neck movements symptomatic of a bad night’s sleep.

But Ishiguro insisted both would prove invaluable to his continued research as museum visitors get to have conversations with the ‘droids and operate them as extensions of their own body.

“This will give us important feedback as we explore the question of what is human,” said the 50-year-old. “We want robots to become increasingly clever.”

A chatty humanoid called Pepper designed by SoftBank as a household companion is set to go on sale for around $2,000 in Japan next year after a successful debut earlier this month.

As the line between humans and machines continued to blur, Ishiguro’s mechanical newscaster performed tongue-twisters, to the amazement of their human counterparts.

“My dream is to have my own TV show in the future,” Kodomoroid said.