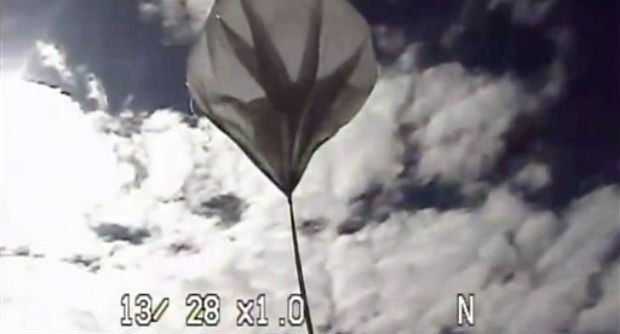 This image taken from video provided by NASA shows the launch of the high-altitude balloon carrying a saucer-shaped vehicle for NASA, to test technology that could be used to land on Mars, Saturday June 28, 2014 in Kauai, Hawaii. Saturday’s experimental flight high in Earth’s atmosphere is testing a giant parachute designed to deliver heavier spacecraft and eventually astronauts. AP

LOS ANGELES — NASA has tested new technology designed to bring spacecraft — and one day even astronauts — safely down to Mars, with the agency declaring the experiment a qualified success even though a giant parachute got tangled on the way down.

Saturday’s $150 million experiment is the first of three involving the Low Density Supersonic Decelerator vehicle. Tests are being conducted at high altitude on Earth to mimic descent through the thin atmosphere of the Red Planet.

A balloon hauled the saucer-shaped craft 120,000 feet (36,576 meters) into the sky from a Navy missile range on the Hawaiian island of Kauai. Then, the craft’s own rocket boosted it to more than 30 miles high at supersonic speeds.

As the craft prepared to fall back to earth, a doughnut-shaped tube around it expanded like a Hawaiian puffer fish, creating atmospheric drag to dramatically slow it down from Mach 4, or four times the speed of sound.

Then the parachute unfurled — but only partially. The vehicle made a hard landing in the Pacific Ocean.

Engineers won’t look at the parachute problem as a failure but as a way to learn more and apply that knowledge during future tests, said NASA engineer Dan Coatta with the Jet Propulsion Laboratory in Pasadena, California.

“In a way, that’s a more valuable experience for us than if everything had gone exactly according to plan,” he said.

A ship was sent to recover a “black box” designed to separate from the vehicle and float. Outfitted with a GPS beacon, the box contains the crucial flight data that scientists are eager to analyze.

NASA investigators expect to know more once they have analyzed data from the box, which they expect to retrieve Sunday along with the vehicle and parachute. They also expect to recover high resolution video.

“We’ve got a lot to look at,” Ian Clark, principal investigator at NASA’s Jet Propulsion Laboratory, told reporters on a teleconference.

Since the twin Viking spacecraft landed on the red planet in 1976, NASA has relied on a parachute to slow landers and rovers.

But the latest experiment involved both the drag-inducing device and a parachute that was 110 feet in diameter — twice as large as the one that carried the 1-ton Curiosity rover in 2011.

Cutting-edge technologies are needed to safely land larger payloads on Mars, enabling delivery of supplies and materials “and to pave the way for future human explorers,” a NASA statement said.