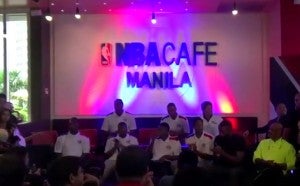 MANILA, Philippines — With free speech overflowing in the cyberworld, netizens bombarded the organizers of the Gilas Last Home Stand after they failed to keep their promise of a five-on-five between the National team and a selection of NBA all-stars.

Senator Juan Edgardo “Sonny” Angara, on Twitter, was obviously irate with the impetuous event that only showed practice drills for kids and the NBA players not even wearing any basketball game attire.

“Some sanity—tomorrow’s game is reportedly cancelled and tickets for both days to be refunded, reportedly.”

He added that the only thing to do is to refund the tickets and apologize to the customers who paid for it.

Organizers reportedly tried to clarify that only drills would be conducted instead of an actual regulated game but the fans would not take any of it.

Fellow legislator Senator Joseph Victor Ejercito was just as surprised as Angara on the fiasco that happened Tuesday night at the Smart-Araneta Coliseum.

“NBA did not allow players tom play since it’s not a league-sanctioned event,” he added with a sad smiley to boot.

Netizens, on their own right, had a field day in complaining to the Philippine Long Distance Company about the botched game, with the PLDT acronym the most played-upon character.

For them the telecom giant does not relate to any phone service but to a mere practice, specifically “Practice Lang Daw Talaga.”

Despite the hate, PLDT Chairman Manny V. Pangilinan claimed up to his company’s shortcomings, owning the responsibility of the cancelled event with one netizen giving praise to the tycoon.

“Amid the blame game in the PLDT-NBA hullabaloo, MVP owns up to it. And that’s why he’s the chairman. His officials can learn a thing or two,” one Billie Bautista posted.

Another netizen saved the telecom company, saying that if there’s one to blame, it would be the organizers.

“If we’re going to point fingers here, it shouldn’t be at MVP/PLDT,” Bubbles Magpayo posted. “It should be with the organizers or promoters.”

All show, no play: ‘We never said there was a game’