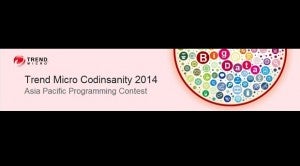 MANILA, Philippines – The Philippines will compete for the second time in the Codinsanity Asia Pacific Programming Contest which, for this year, seeks to challenge participants with big data problems, according to one of its organizers in a statement.

“As big data adoption enters into the mainstream, gaining insights from big data has become the latest trend of the cloud era,” according to Trend Micro Inc., one of the leaders in cloud security.

“This year, the contest will challenge participants with big data problems, and the contestants need to write the most efficient yet correct code to explore new solutions to enhance data correlation, and to demonstrate their innovative ideas,” it said.

“The test problem will be announced at the event and will test the ability of the finalists to innovate, execute, engineer, and present,” it said.

Both will compete for the grand trophy from August 16 to 19 in Taiwan, along with other teams from Taiwan, Japan, and China. 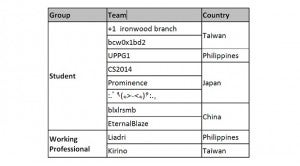 For the first time in its history, the contest was opened to students as well as working professionals in 12 areas around Asia, attracting a record-high total of 422 teams to enroll in the contest, according to Trend Micro Inc.

There were four rounds of preliminary online competitions before the finals.

“Through the platform of international programming contests, we are sharing the real-world experience of Trend Micro’s R&D teams around the world with contestants, in a hope to encourage more young talent across Asia to join the software industry.”

“As we have observed, software development has become an important and rising power of the Asia Pacific region. Therefore, we have initiated this activity to enhance the ability of Asia Pacific professionals in solving big data problems, while offering a global arena for contestants to compete and learn from each other to improve software development capabilities around the world,” Chang said.

Additionally, the champion student team will be offered a unique chance of a two-month internship at Trend Micro Taiwan, Japan, or China.