Chelsea Mae S. Luzanta, a University of Santo Tomas (UST) student, shared the video in her Facebook account, which caught the attention of netizens. 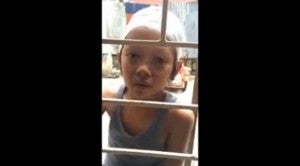 The kid, identified as Gerald, was shown in the video answering with ease mathematical questions on square root asked by Luzanta and her friends.

Gerald was not using any tools like a calculator to solve the problems.

The child distinguished the perfect squares from those that were not and even identified what imaginary numbers were.

Jyra Acebes, a civil engineering student from UST, told INQUIRER.net that she frequently see the kid near their campus.

Acebes narrated an experienced saying the kid begged for some coins from her and her classmates claiming that he is good in Mathematics.

Canlas said he was touched when he saw the two children who were to go to school but didn’t have any money.

“I believe they will have a bright future. They are intelligent and they always have a jolly disposition,” he said.

He added that the kids were inspiring because they beg for some coins so that they could go to school.

A television report said the two seldom go to school because of financial problems.

Netizens, meanwhile, were amazed with Gerard’s skills and hoped that somebody could support his schooling.

A video of a street children showcasing his exceptional Math skills went viral on social media after a netizen posted his video.

A video of a street children showcasing his exceptional Math skills went viral on social media after a netizen posted his video.