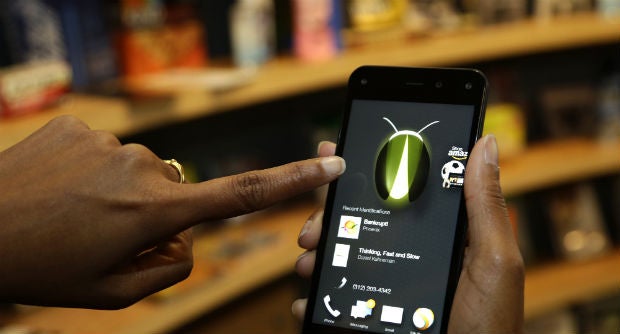 In this June 18, 2014 file photo, the new Amazon Fire Phone’s Firefly feature, which lets the user take a photo of objects, numbers, artwork or books and have the phone recognize the item, is demonstrated in Seattle. Firefly also can recognize songs, TV shows, and movies. AP

ANAHEIM, California — My buying habits have yet to change in my nearly three weeks with Amazon’s shopping-centric Fire phone.

Rather, I’ve found the phone’s Firefly scanning feature to be far more useful as an information-gathering tool.

The idea behind Firefly is a smart one: Use it to keep track of what you see and hear around you, and then buy the things that interest you on Amazon.

By holding the phone’s side button and pointing the camera at a product label or bar code, I’ve identified movie posters, food products and books. I’ve also used the phone’s microphone to identify songs and television shows.

Once an identification is made, it takes just a swipe from the left and a few taps to buy the item through Amazon. The retailer already has your credit card and shipping address on file. The phone comes with a free year of Amazon’s Prime membership, so shipping is free and takes just two days.

Firefly, which is available only on the Fire phone, is more comprehensive and reliable than any other scanner I’ve tried. It correctly identified a Disney toy spyglass and an upcoming Muppets movie. But it also makes its share of mistakes.

Even with Amazon’s huge database, Firefly often couldn’t make a match, such as when I went to a Gap store to buy gifts for toddlers. In other cases, it gets the flavor or size wrong. During a visit to the Disneyland theme parks this week, a bottle of Nesquik chocolate milk got identified as Nesquik strawberry powder to add to milk.

Firefly works better when you scan a bar code rather than the product label, but even then, the bar code for the chocolate milk got identified as Hercules action figures. A single water bottle became a pack of eight.

Without a precise match, it’s difficult to know whether what you’re getting online is really better than what you’re seeing at the retail store. It would have been better to get several products and sizes to choose from rather something definitive that might or might not be correct.

But the bigger hurdle for me is social.

I imagine retail store clerks giving me suspicious glances as I point the phone toward an item for several seconds as it tries to make a match. For that reason, I didn’t try too hard at the Gap. Besides, I wanted the shirts right away, not in two days by mail.

No one has said anything to me about my scanning, and it’s possible no one has even noticed. But I’ve had to be discrete. For instance, at a Disney gift shop, I refrained from scanning a special Disney edition of the Rubik’s Cube puzzle because a store employee was keeping watch nearby. I went outside instead to type in a search.

This doesn’t mean your phone can’t be useful for shopping.

While visiting Thailand last year, I was wavering on whether to buy an external storage drive at a discount mall. By typing in a Web search, I learned I could get a better deal back home. So I waited.

A few weeks ago, I used a standard Web search to verify the type of battery I needed on a remote control before buying it at a drug store.

I didn’t need the Fire phone for any of that.

I also don’t need it to check prices online. Amazon.com Inc. has apps for iPhones, Android and Windows phones. The iPhone and Android versions let you scan product images just like Firefly, and all three let you scan bar codes. The feature isn’t called Firefly and sometimes produces different results, but the concept is similar.

To appreciate the Fire phone and Firefly, I need to think beyond shopping.

Firefly is useful for retrieving supplemental information, even if its shopping tools aren’t essential or unique. It currently works with Amazon’s IMDb movie and television database, plus five apps from other companies. More are coming.

A scan of a Lady Gaga album, for instance, gave me not only digital and CD buying opportunities through Amazon, but also a Lady Gaga-inspired streaming station on iHeartRadio and concert tickets through StubHub.

You can also use Firefly to scan business cards, menus and other items with texts or QR codes. Firefly pulls out phone numbers, Web addresses and other useful information you might need later.

It also uses voice-recognition technology to identify songs, movies and TV shows. The hotel lobby was playing a Disney Channel show I didn’t know. Firefly not only identified it as “Jessie,” it gave me the season and episode number, too.

As an information companion, Firefly needs more outside apps to link their databases to Firefly.

In addition, Firefly shouldn’t require you to point the camera at an item for several seconds at times. It’s hard to stay discrete that way. Why can’t it simply snap and store the photo before taking its time analyzing it?

Doing that would also let you make an identification later if you happen to be without an Internet connection when you scan the product. And the photo would let you remember and identify the item manually when Firefly finds no match.

Once the technology gets better, I can see Firefly becoming useful for learning more about things around me. I don’t need to spend a dime on Amazon to do that.