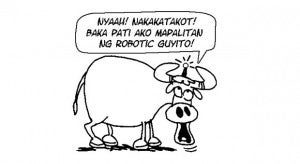 WASHINGTON—Robots and artificially intelligent devices will take over many jobs now done by people, and experts are divided as to whether their spread will do human society more good than harm.

But experts are divided on whether these technological advances will be helpful, with 48 percent of respondents to Pew’s survey saying they will destroy jobs and increase income inequality.

Nevertheless, a slim majority said the technology would take over undesirable tasks and generate new kinds of human employment.

The report is not based on a randomized poll sample but instead on questionnaire sent to people deemed experts or affiliated with certain organizations. The survey was taken between November 2013 and January 2014.

Lee Rainie, director of the Pew Research Internet Project, said experts saw “the accelerating displacement of work that can  be done more efficiently and cost-effectively” by robots.

This means “a transformation of labor, especially in the fields of transportation, fast food and medicine; freedom from day-to-day drudgery that allows people to define work in a more positive and socially beneficial way,” he added.

But Rainie said many saw this as leading to “a shrinking of the middle class and expansion of the ranks of the unemployed.”

“Automation is [the ‘Harry Potter’ villain] Voldemort: the terrifying force nobody is willing to name,” said Jerry Michalski, founder of Relationship Economy eXpedition, a think tank of corporate executives.

“The race between automation and human work is won by automation, and as long as we need fiat currency to pay the rent/mortgage humans will fall out of the system in droves as this shift takes place,” he said.

Stowe Boyd, lead researcher at GigaOM Research, said the growing use of autonomous vehicles would take away important jobs for men such as truck and taxi drivers.

“An increasing proportion of the world’s population will be outside of the world of work—either living on the dole, or benefiting from the dramatically decreased costs of goods to eke out a subsistence lifestyle,” he said.

“The central question of 2025 will be: What are people for in a world that does not need their labor, and where only a minority are needed to guide the ‘bot-based economy’?”

Others were optimistic, such as JP Rangaswami, chief scientist for Salesforce.com.

“The very nature of work will have changed radically by 2025, but only in economies that have chosen to invest in education, technology and related infrastructure,” he said.

“Some classes of jobs will be handed over to the ‘immigrants’ of AI and robotics, but more will have been generated in creative and curating activities as demand for their services grows exponentially.”

Vint Cerf, chief Internet evangelist for Google, said: “Historically, technology has created more jobs than it destroys and there is no reason to think otherwise in this case. Someone has to make and service all these advanced devices.”

Respondents in this latest survey generally agreed that the education system was failing to teach the skills that students needed for the future.

Some respondents criticized the system for promoting memorization of tasks rather than creativity, teaching a “Henry Ford education for a Mark Zuckerberg economy,” said Aaron Smith, senior researcher with the Internet Project.

Also, Smith said, some respondents concluded that jobs that didn’t require specifically human traits—such as empathy, ingenuity or resourcefulness—were at risk for being replaced, including low-skill, blue-collar jobs or even white-collar jobs that had people performing repetitive tasks.

Respondents offered a few theories about what might happen if artificial intelligence took over some positions and fewer jobs were created.

Judith Donath, a fellow at Harvard’s Berkman Center for Internet and Society, foresaw chronic mass unemployment with the wealthy living in “walled cities, with robots providing the labor.”

Some respondents see people returning to small-scale, handmade production, and an appreciation would grow for products with the “human touch.”

Others thought people could also face abundant leisure, allowing them to pursue their personal interests.

The study was not representative of a particular group of experts, only of those who chose to respond.

The report is based on views from nearly 1,900 respondents selected by Pew because of their background.

They were affiliated to think tanks; companies including Cisco Systems, British Telecom and Microsoft; universities such as Massachusetts Institute of Technology; news organizations and activist groups such as  Electronic Privacy Information Center.