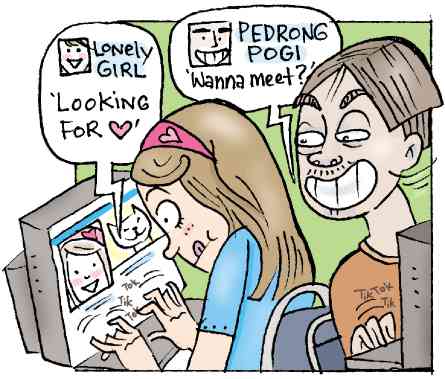 This was the No. 1 advice police officials gave teenagers in a recent campus tour in Quezon City that seeks to promote awareness about cybercrimes, online bullying and other schemes where perpetrators look for potential victims on the Internet.

A total of 27 police officers held lectures for students at Judge Juan Luna High School in Barangay Bungad on Aug. 28 as part of their Public Safety Junior Leadership Course (PSJLC).

One of the lecturers from the Internal Affairs Service of the National Capital Region Police Office, for example, urged the students to make their Facebook profiles private, use aliases instead of their real names, and change their passwords weekly.

Changing the password weekly as a security measure is worth the effort, especially for social network denizens who frequent Internet shops, he added. “There are computer programs or keyboards that can save your password even if you log out. So it’s better if they just change their passwords weekly.”

The students were also encouraged to report, with the help of their parents, any case of cyberbullying or online identity theft to the Philippine National Police, particularly to the Anti-Cybercrime Group (ACG) based in Camp Crame or any police station that can forward the complaint to the ACG.

The group was established only last year and the campus tour was in line with efforts to inform the public about the ACG’s functions.

According to team leader SPO1 Napoleon Moaje of the Malabon police and assistant leader SPO1 Luisito Ubias of the Quezon City Police District, the lectures were part of a four-day community immersion program of the PNP, with participants drawn from across the country.

Judge Juan Luna High School principal Lucia Herrera welcomed the initiative: “This way, the police gain the trust of the community. The students, who may be scared of authority figures, now know that they can approach the police for help.”

In the Know: The cybercrime law