Letting your car find a spot and park itself 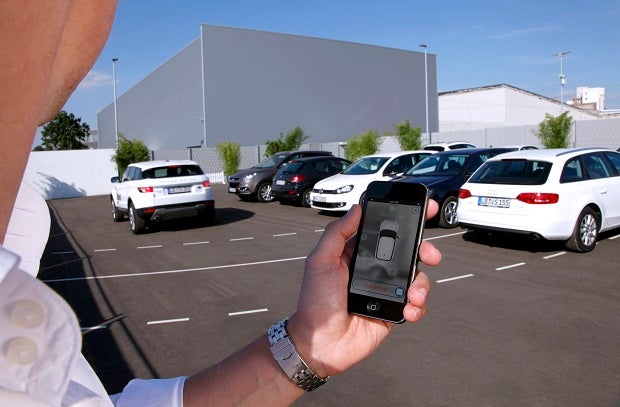 In this undated photo supplied by Valeo, a person activates a self-parking vehicle via a smartphone application. Technology being honed by the French auto parts maker uses a dozen ultrasonic sound-wave sensors, 360-degree cameras and a laser scanner to allow a vehicle to safely park within a few centimeters of other vehicles. AP

DETROIT (AP) — With a thumb swipe on a smartphone, your car one day will be able to drive into a parking deck, find an open spot and back into a space — all by itself.

Technology being honed by French auto parts maker Valeo uses a dozen ultrasonic sound-wave sensors, 360-degree cameras and a laser scanner to safely park within a few centimeters of other vehicles. Then, when you’re done with dinner or a business meeting, the car will return to you after another swipe of the thumb.

The potential benefits are plenty. More orderly parking means less congestion. Drivers are spared the time and frustration of the hunt for a spot. Parking lots can squeeze more vehicles into limited space.

The fully-automated system called “Connected Automated Valet Parking” is still about a decade away, however. More states must permit driverless cars and regulations have to be crafted. Equipment needs to be rolled out.

Still, Valeo executives see it as a big step toward the day in the distant future when cars actually drive themselves with no one behind the wheel.

Other companies have already demonstrated self-parking systems, but in most cases the driver has to find the spot and activate the system to make it work. The Valeo system, demonstrated Monday at an intelligent vehicle conference in Detroit using a Land Rover SUV, allows cars today to do tasks currently performed by human valets.

“The car is able to do a much better parking maneuver than we as humans,” said Amine Taleb, Valeo’s project manager for advanced driver assistance systems.

Here’s how it works: Drivers approach their destination and the system finds a deck with an open space. The driver goes to the deck and activates the system. The deck then tells the car where the open space is. The sensors, cameras and laser activate, letting the car drive itself about 3 miles per hour, winding its way to the space and backing in. The system can even find a space on its own without a signal from a deck.

The system won’t let the car hit anything, Taleb says. And it can brake and even take action on its own to evade a hazard such as another moving car. A driver can even watch the car park through the cameras and software that simulates an aerial view.

Although the technology is already available, there are hurdles. Only nine states allow driverless cars on public roads, and then only for testing purposes, said Scott Belcher, CEO of the Intelligent Transportation Society of America, the group holding the conference.

Also, parking decks will have to be equipped with systems to communicate with cars. Radio frequencies haven’t been allocated yet by the federal government. The auto industry is vying with the cellphone industry for the bandwidth, for vehicle-to-vehicle and vehicle-to-infrastructure communication, Belcher said.

Cyber security guidelines and government regulations have to be put in place. And legal liability has to be sorted out if the car somehow gets into a wreck.

What’s likely within five years is an interim step: The driver finds the space and the car then parks itself. Taleb wouldn’t say if an auto company is interested in buying the self-parking system.

The traffic benefits alone are tremendous. Omno Zoeter, a senior research scientist at Xerox, says some studies show as many as 30 percent of urban drivers are looking for parking at any given time.

Eugene Tsyrklevich, the CEO of Parkopedia, an app that monitors more than 30 million parking spaces in 45 countries to help drivers park, predicts a decade of transition as cars and then parking garages adopt technology.

“Driving around looking for a space is not dead yet,” said Tsyrklevich. “But it will be.”

Britain to trial driverless cars from 2015