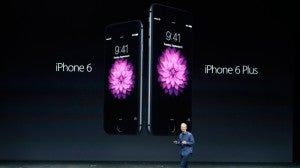 HONG KONG—It may be the biggest chunk of money you could ever have to part with to get your hands on a small device.

Wealthy mainland Chinese looking to buy the new iPhone 6 next week could expect to pay an eye-watering $2,500 for the handsets in Hong Kong, following Apple’s decision to delay the launch in China.

Hong Kong has long been a hub for resold and refurbished phones, and delighted vendors there were coping with a flood of preorders from the Apple-obsessed mainland.

The price, say sellers in the southern Chinese city, is a bargain—the phones can then be resold on the mainland, where fans could pay up to 30,000 yuan ($5,000) for a new handset.

Apple this week unveiled the two latest models in its iPhone series, both of which boast a larger screen, in a bid to recapture its role as a technological trend-setter.

The phones will be made available in 10 countries including Hong Kong from Sept. 19, but Apple has not yet stated when they will be available on the mainland, despite it being one of the US tech giant’s largest markets.

Massive queues and frantic trading were seen outside Apple stores in Hong Kong on previous iPhone launches, with resellers buying units from hundreds of new iPhone owners to sell on later at inflated prices on the legal but unauthorized “gray market.”  At Sin Tat Plaza, a bustling mall crammed with mobile phone stores in the city’s Mongkok district, posters and replica models of both iPhone 6 models are already on display on virtually every corner.

“The demand in the mainland is bigger for the iPhone 6 compared to the iPhone 5s because there are bigger changes made to it,” Arthur Chung, who runs a phone reseller shop at the three-story shopping center, told Agence France-Presse (AFP).

Chung said he would order phones from the United States to match a preorder made by a mainland customer for 300 units of the iPhone 6.

The 128-gigabyte gold version of the larger iPhone 6 Plus could be resold for over HK$20,000 ($2,580), Gary Yiu, manager of the nearby iGeneration mobile phone store, told AFP.

Mainland China was among the first countries where the iPhone 5s was available for sale last year, and the then newly introduced gold iPhone 5s model was particularly popular.

Yiu said his store received scores of preorders for iPhone 6 models a week before its release, with mainland Chinese customers making up half of the orders.

Those customers could easily turn a profit by reselling the phone on the return home, he said.

“Because it is not being sold in mainland China first, there will be a lot of mainland customers coming here to buy it, so there will be less stock and it can be sold at such a high price,” he said.

In the United States, the new iPhone 6 will start at the same price of existing iPhones at $199, while the iPhone 6 Plus will be at $299 with a two-year contract.

Apple is attempting to adapt to consumers’ apparent preference for bigger displays with the 4.7-inch iPhone 6 screen and the 5.5-inch iPhone 6 Plus. In Asia, arch rival Samsung has long been releasing hugely popular lines of larger handsets.

Apple’s products are wildly popular in China, where a teenager sold his kidney and used the funds to buy an iPhone and an iPad in an incident widely reported in 2012.

Netizens have been pining for the latest iPhone model on Weibo, China’s version of Twitter. “Take my money and take my cards, just hand me the mobile phone,” one Chinese netizen posted.

“I’m getting a pay rise in September. I want to buy an iPhone 6. I don’t have to sell a kidney,” another added.

Beijing’s Ministry of Industry and Information Technology does not list the iPhone 6 as having received government approval.

Preordering in Hong Kong started on Friday, with all models unavailable within two hours. The larger iPhone 6 Plus model was sold out in less than an hour.

Apple said the devices would be available in at least 115 countries by the end of the year. AFP

9 things you might have missed from Apple’s iPhone 6, Watch announcement