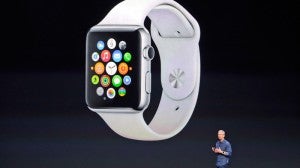 ZURICH – Apple may be known for revolutionizing the world of music and mobile phones, but Switzerland’s centuries-old luxury watchmakers are unimpressed with the US tech giant’s latest foray into their world.

The Apple Watch, unveiled last week after months of anticipation, combines the personalized functionality that made the brand famous into a wearable computer that can also connect to iPhones.

But Biver said the gadget, which will be released early next year, is not the “revolutionary product” it claims to be.

The timepiece, with its square touch-screen face and curved edges, lacks “sex appeal” and is too feminine, he said.

In fact, Biver told German media last week: “It looks like it was designed by a student in their first semester.”

The company has meanwhile been treading on the toes of some top luxury brands, plucking the sales director from Tag Heuer, a Swiss brand in the LVMH stable, in addition to former heads of Burberry and Yves Saint Laurent.

Tag Heuer chief Stephane Linder said he was surprised at Apple’s heavy focus on sport and health monitoring functions, which aren’t even new to the market.

Equipped with pulse sensors, the smartwatch can monitor heart rates and chart activity levels along with the number of calories burned in a day.

“I thought they would go in a less specialised direction,” Linder told AFP, though he added that he would “pay more attention” when new applications for the device begin surfacing.

With pricing set to start at $349 (269 euros), Apple’s watch will not be playing in the same league as the Swiss watchmakers who dominate the luxury end of the market.

“They don’t have the same target,” he told AFP, insisting that comparing Apple’s new device to many Swiss watch offerings was like comparing a Mini Cooper with an Aston Martin.

Biver agreed, insisting Apple would have no impact on the high-end.

“Luxury is eternal, it is perennial. It is not something that becomes worthless after five years,” he said, stressing that connected watches on the other hand were “doomed to become obsolete.”

The real threat is to the lower end of the scale, analysts say, with entry-level brands owned by the Swatch Group prime targets.

A big player in prestigious timepieces with its luxury brands like Breguet, Omega and Harry Winston, the Swiss group also owns Tissot and is best known for its colorful plastic Swatch watches.

Swatch Group does not break down its earnings by brand, but Vontobel analyst Rene Weber told AFP he estimates the two latter brands account for about 15 percent of its profits.

But chief Nick Hayek has also dismissed his new rival, telling media he was “not nervous” about Apple diving into time pieces and insisting many of the capabilities offered in the new device were already available in Swiss watches.

For example, Apple’s “digital crown” button, which controls many functions to keep the screen visible, was inspired by a Breguet invention, he said.

9 things you might have missed from Apple’s iPhone 6, watch announcement