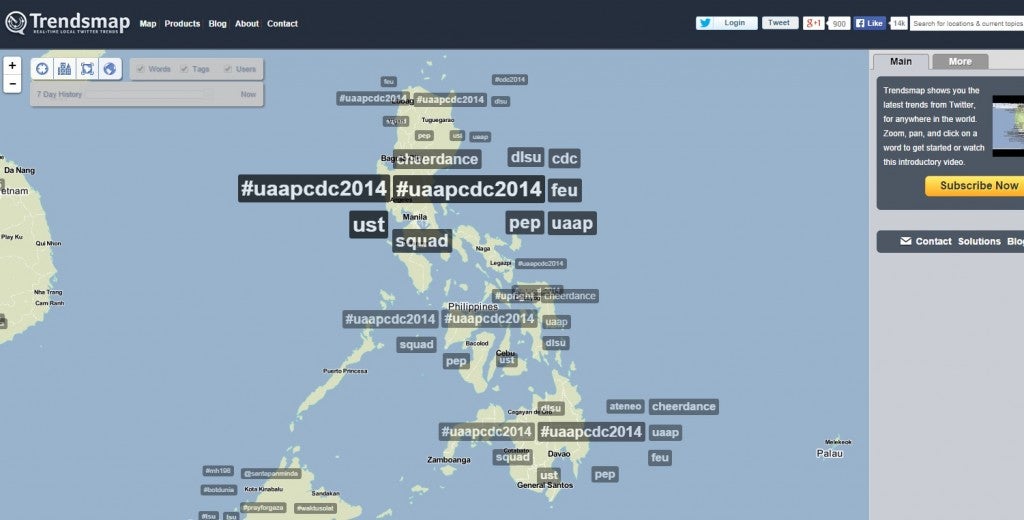 MANILA, Philippines – With the whole country tuned in to watch this year’s UAAP cheerdance competition, #UAAPCDC2014 and other related hashtags trended locally and worldwide on Sunday.

According to online tool Trends24, #UAAPCDC2014 trended worldwide on Twitter since the competition started airing live at around 2 p.m.

After the National University Pep Squad was announced winner, the words “Congrats NU” immediately topped the list of trending keywords. Before that, however, netizens wondered aloud if “UP or NU” would bag this year’s crown while some cracked jokes about NU’s owner, business tycoon Henry Sy. The University of the Philippines (UP) also received its own trending phrase “Congrats UP” after it was announced first runner-up.

Another Twitter tool called Trendsmap showed that the cheerdance competition not only made waves in Metro Manila, where the UAAP schools were located, but also in the Visayas and Mindanao. Also trending were the names of the competing teams.

Topsy showed that tweets about UAAP, the competition and the teams spiked in the last several hours. #UAAPCDC2014 received 330,000 tweets in the last 24 hours alone (as of 6:30 p.m. Sunday).

Some sentimental netizens and hopeless romantics also took the opportunity to dish out love quotes related to the competition and the cheer routines – which featured both lifts and unfortunate falls.

“Nobody likes to be second best,” one Twitter user said while another posted “Whenever you’re down, there will always be someone to lift you up.”

“You fall for someone whom you know will never catch you, but you fall for them anyway #uaaphugot,” a netizen said.