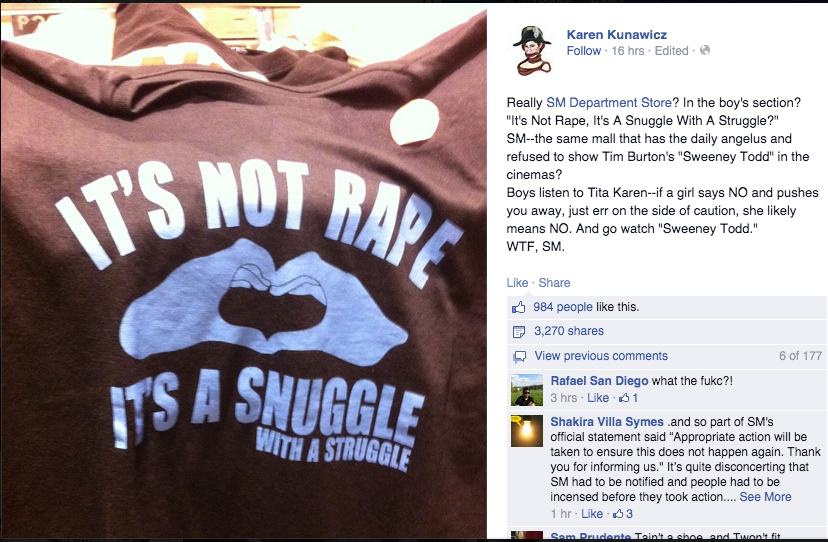 MANILA, Philippines—Giant shopping mall chain SM Supermalls said Tuesday it had withdrawn from its shelves a T-shirt that made fun of rape, following social media outrage.

“We’ve been informed via social media that we might be stocking a t-shirt with a message that we too find unacceptable,” SM said in a statement.

A photo of a T-shirt with the slogan: “It’s not rape. It’s a snuggle with a struggle”, was posted by writer Karen Kunawicz on her Facebook page on Monday and quickly went viral.

SM Supermalls said it was investigating how the shirt got into its inventory. “We have immediately pulled out all the T-shirts of the consignor that distributes them, and we are investigating why it was included in our delivery of assorted t-shirts,” it said.

“We do not tolerate such action. SM does not support such irresponsible and malicious acts that mock important and sensitive social issues,” said SM, promising that “appropriate action” would be taken to ensure it would not happen again.

Kunawicz’s Facebook photo of the T-shirt, which was displayed in the teen boys’ section, was shared almost 3,000 times and liked by close to 1,000 people by Tuesday afternoon.

“I’m angry not just with SM but with the group of idiots that envisioned and actually produced this,” one Facebook user said in a comment to Kunawicz’s post.

“A big company has an even bigger social responsibility to control what goes through their stores,” another person on Facebook said in a separate comment.

Twitter user @Photoworldmanila said: “If you are a woman, you will be disgusted with #SM.”