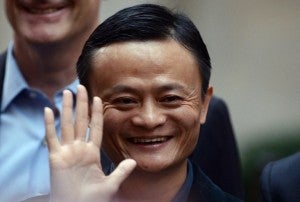 SHANGHAI–The largest stock offer in history has made Jack Ma, founder of e-commerce giant Alibaba, China’s richest person with a fortune of $25 billion, an annual wealth ranking for the country showed Tuesday.

Ma, who had to persuade friends to give him $60,000 to start Alibaba just 15 years ago after being rejected by US venture capitalists, now leads a company valued at more than $200 billion after listing on the New York Stock Exchange Friday.

“It has been an amazing year for China’s best tycoons despite the jitters about the Chinese economy,” said China-based luxury magazine publisher Hurun Report in its annual rich list.

Ma reaped more than $800 million from selling shares through the initial public offering in Alibaba, based on company filings, with the value of his remaining stake of 7.8 percent surging to more than $17 billion by Monday.

Last year the estimated wealth of the former English teacher turned Internet entrepreneur was just over $4.0 billion, which did not even place him in the top 20, according to the 2013 survey.

Ma’s parents were poorly educated and his father depended on a monthly retirement allowance of just $40 to support the family, according to Chinese state media.

Only one other of Alibaba’s 18 co-founders made the rich list this year, according to the Hurun Report. He is Simon Xie, now vice president of Alibaba’s China investment, with $1.6 billion.

But technology commanded half of the top 10. Pony Ma of Tencent, operator of China’s most popular instant messaging application WeChat, was fifth with $18.1 billion.

Completing the top 10 were father and son team Yan Jiehe and Yan Hao of road-builder China Pacific Construction in seventh position and another real estate mogul, Yan Bin of Reignwood in eighth.

China’s real estate and infrastructure industries have been hit by the slowing economy.

Still, Hurun Report said the number of US dollar billionaires in China hit 354 this year, up 39 from last year.

But a corruption crackdown and austerity program launched by leader Xi Jinping has taken its toll on current and former members of the rich list, with several facing criminal punishment or fleeing overseas.

They include Liu Han of conglomerate Hanlong, who was sentenced to death for “mafia” crimes, and Xu Ming of conglomerate Shide who is awaiting sentencing in a corruption case linked to disgraced politician Bo Xilai.

“The anti-corruption drive has a strong effect. We found 18 people from last year’s list in trouble with the authorities,” Rupert Hoogewerf, founder of the Hurun Report, told journalists in Beijing.