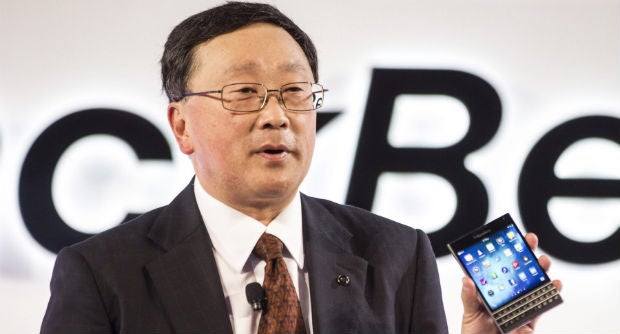 TORONTO—Hoping for a comeback, embattled Canadian company BlackBerry has launched a new smartphone.

Chief executive John Chen on Wednesday unveiled a large-screen, square sized phone called the Passport to a Toronto audience. London and Dubai also hosted launch events. No event was held in the US where analysts say there is little demand or carrier interest.

BlackBerry has increasingly lost relevance as a smartphone company in the years since the 2007 launch of Apple’s touchscreen iPhone and the 2008 introduction of Google-powered Android phones.

Chen, who took over as CEO last fall after failed attempt to sell the once-iconic company, said the new phone was in the works before he joined BlackBerry and joked that he can only take credit for not killing it.

He said he’s determined to win back market share in Canada and had hockey-great Wayne Gretzky give a brief speech in support of BlackBerry.

“The reason why we’re here is to really try to get the Canadian people to rally behind us,” Chen said. “I need that help, badly.”

The Passport is the size of a passport and has a square screen that measures 4.5 inches. It has a touch screen and a physical keyboard, something traditional BlackBerry business users prefer.

Chen said the Passport will be available in the US via A&T on an exclusive basis by the end of the year. It is also available for $599 for a limited time through Amazon. He said he expects to release a more popular phone called the “Classic” later this year.

The BlackBerry smartphone, pioneered in 1999, changed the culture by allowing on-the-go business people to access wireless email. Then came a new generation of competing smartphones, and suddenly the BlackBerry looked ancient. Apple first showed that phones can handle much more than email and phone calls with its iPhone. BlackBerry has been hammered by the competition.

Since being named chief executive 10 months ago, Chen has been putting more emphasis on BlackBerry’s mobile device management business, a collection of software that allows IT departments to manage different devices connected to their corporate networks. He has also emphasized BlackBerry’s popular BlackBerry Messenger application that is now also available on Apple and Android devices. And he’s tried to highlight Blackberry’s embedded QNX software systems, which are used in-vehicle infotainment systems and industrial machines.

BGC analyst Colin Gillis said the Passport is not critical to BlackBerry’s survival because the company doesn’t need to sell many to make money on them. Gillis said while the square shape is odd, past attempts to compete with Apple and Android with similar looking devices failed.

“It has a physical keyboard and a big screen. There might be some professionals who value that. Is it a little odd looking? Yes,” Gillis said.

Shares of BlackBerry rose 12 cents to $10.69 in afternoon trading on the Nasdaq.