BEIJING — A slick new English-language Chinese government website offering contact with Premier Li Keqiang appeared to have hit a snag on Thursday, with emails to the address failing to deliver.

The english.gov.cn site launched by the State Council, China’s cabinet, on Wednesday features cartoon-like images of Li, the country’s second most senior official, who is scheduled to visit Europe this week.

It has a section devoted to Li, the official head of China’s Communist Party-controlled government, including videos, speeches, graphics of his travels and a prominent link labelled “Contact the Premier.”

But several emails sent by AFP to the address given, [email protected], could not be delivered on Thursday. 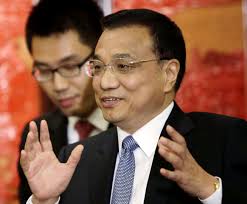 “DNS Error: Address resolution of gov.cn failed: DNS server returned answer with no data,” said one error message, while another read: “Bad destination host ‘DNS Hard Error looking up gov.cn (A): domain has no A record.'”

The State Council could not be immediately reached for comment.

Li is set to travel to Germany on Thursday, meeting German Chancellor Angela Merkel before heading to Russia and Italy, with more than 70 agreements expected to be signed during the trip, according to China’s foreign ministry.

While top-ranking politicians in some countries have established public email addresses and social media accounts, China’s traditionally more secretive elite has been reluctant to do so.

In 2011 university student Lei Chuang sent Li’s predecessor Wen Jiabao more than 200 letters asking the then-premier to dine with him and discuss discrimination against sufferers of hepatitis B, state-run media reported.

Lei carried on writing to Wen, and later said on social media that after his 800th missive, he received a call from a member of staff at the State Council, asking him to stop sending them.