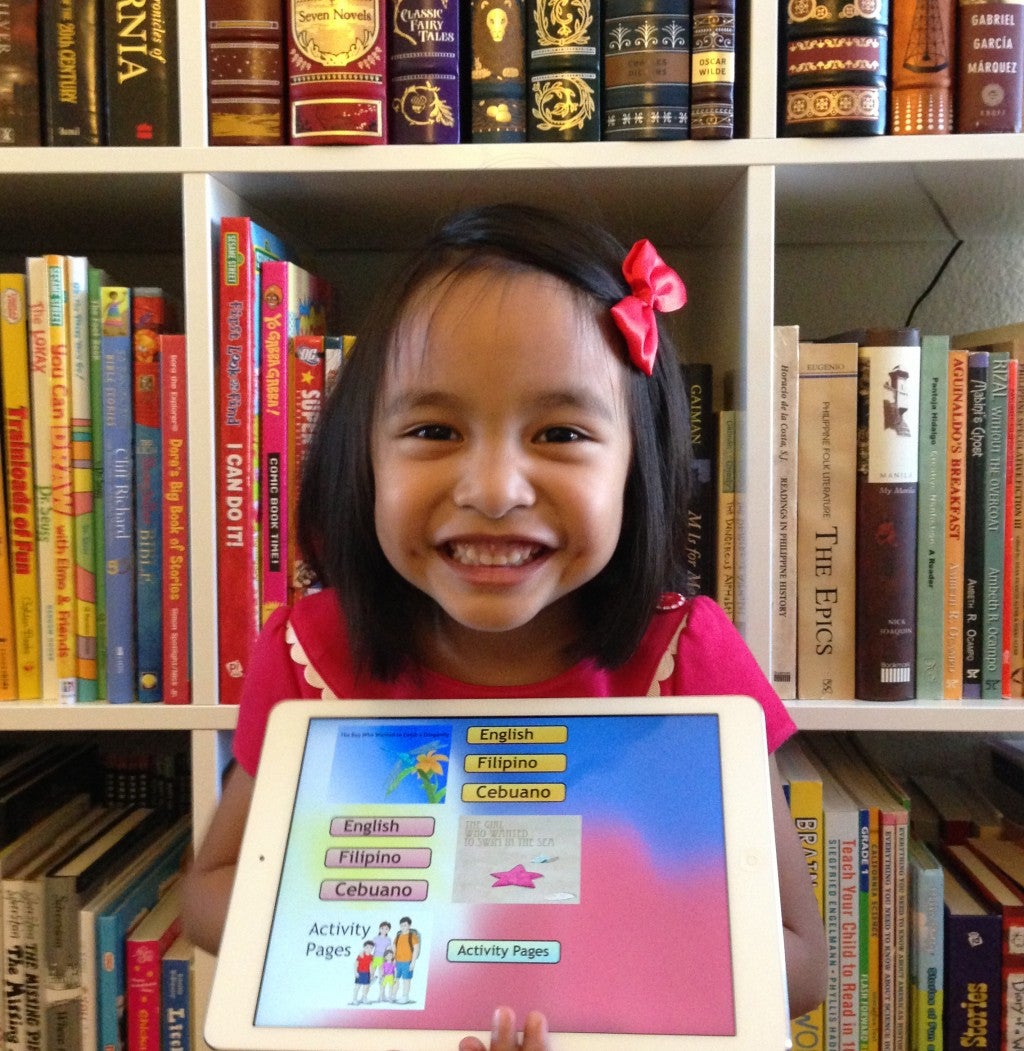 MyStorya v2, produced by Silicon Valley-based EggCrate Ideas, is the first and only storybook app of its kind in the world, having both written text and audio narration in English, Filipino and Cebuano.

MyStorya v2 features two books written for pre- and young-readers ages four to eight years old. It includes a word-matching game where readers can match the correct word in Filipino and Cebuano to its English equivalent. Two new touch puzzles are also part of the new version.

MyStorya is a learning tool for children of Filipino descent, wherever they may be. OFWs in the Middle East, immigrants in the US, or a family transplanted to Europe will find it difficult to find children’s storybooks written in Filipino in their local libraries or bookstores. But with myStorya readily available in Apple app stores and accessible right from their mobile devices.

The new version of myStorya has more interactivity, notes EggCrate Ideas Founder and General Manager Mark Gatela. “We made improvements on this version based on the feedback we got from the children and parents of our beta test group when we launched the first version of the app in September last year,” Gatela explains.

The audio narration is another unique feature of myStorya v2, according to Gatela. “The ability to expose readers to the sound and cadence of the languages gives this app an advantage over text-only printed and digital storybooks,” he points out.

“In August this year, our team showed a preview of myStorya v2 at a live Story Time session with around 20 children in Northern California, and it was very well-received. The participating children responded positively to the stories, and our team observed kids as young as four years old pick up words in Filipino and/or Cebuano very quickly just from reading or hearing the stories,” Gatela adds.

Not replacement for parents

Gatela emphasizes that the goal of the app is not to replace parents reading to their children. Instead, the company hopes that the app will be used to supplement other educational tools that parents already use.

The storybook app can also serve as supplemental material that Philippine educators can use in the new Mother-Tongue-Based Multi-Lingual Education (MTB-MLE) curriculum. This is especially true for K – 3rd Grade, which corresponds with myStorya’s primary audience.

The storybook titled “The Girl Who Wanted to Swim in the Sea” was in the first version of the app. This storybook introduces young children to the idea that dreams and wishes can come true, even though sometimes one has to overcome hurdles and work hard to fulfill them.

“The Boy Who Wanted to Catch a Dragonfly” is a whimsical adventure set in the lush countryside near the towering Mount Apo in Mindanao, and introduces readers to some of the amazing animals found in that area. The English and Filipino versions of this book are narrated by popular Philippine advertising professional Joseph Benjamin Tapia who has voiced major TV and radio commercials, while the Cebuano version is narrated by local radio talent Gaspar Awid.

Both stories were written by seasoned writer and editor Petite Gaces Gatela, and illustrated by Cebu International School Art and IT teacher for Elementary and U.P. Cebu Humanities Department Instructor Jessie Saclo III.

The Filipino translations were edited by marketing and events executive and Ateneo de Manila alumna May Frances Baluyot Gilbert, while the Cebuano translations were edited by Cebuano editor and U.P. Cebu College Professor Januar Yap. Davao-based journalist and Edge Davao Associate Editor Jon Joaquin was the story consultant for “The Boy Who Wanted to Catch a Dragonfly”.

Founder Mark Gatela earned his undergraduate degree from the Ateneo de Manila University and his Master’s Degree in Information Systems from the University of San Francisco. He was part of the team that created ABS-CBN’s “Game Ka Na Ba!” game-show SMS app. He also spearheaded a team that provided content for the different telecommunications companies in the Philippines back in the early 2000s.

MyStorya v2 will be available for download on all Apple iOs devices (iPhones, iPads) at $3.99. Development is ongoing to make this version available for Android and Amazon devices later this year.

With the launch of version 2, EggCrate Ideas is making the original version of myStorya free for download on iOS, Android, and Amazon devices. For more information, visit MyStoryaApp.com.