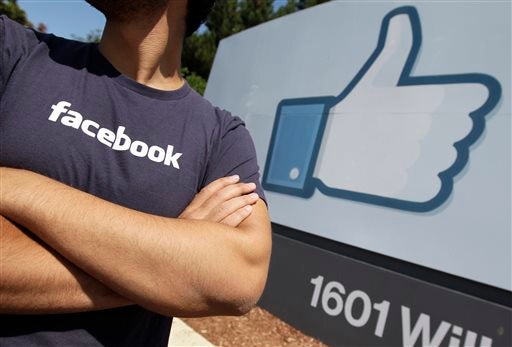 FILE – In this Aug. 17, 2012 file photo, a Facebook worker waits for friends to arrive outside of Facebook headquarters in Menlo Park, Calif. Facebook and Apple, long known for cushy perks such as free meals, laundry service and massages, are among some of Silicon Valley’s biggest companies now eyeing reproductive expenses as the next batch of benefits to offer to their employees. AP

Silicon Valley’s biggest companies have long offered cushy perks to attract top talent and keep workers happy logging scores of hours on the job. But beyond day-to-day luxuries, Facebook and Apple will now give up to $20,000 in benefits to help employees pay for infertility treatments, sperm donors and even to  freeze  their  eggs. The move comes amid stiff competition for skilled engineers, and as many of the biggest firms try to diversify their male-dominated ranks to include and appeal to more women.

“Anything that gives women more control over the timing of fertility is going to be helpful to professional women,” said Shelley Correll, a sociology professor and director of the Clayman Institute for Gender Research at Stanford University. “It potentially addresses the conflicts between the biological clock and the clockwork of women’s careers: The time that’s most important in work, for getting your career established, often coincides with normal fertility time for women. This can potentially help resolve that by pushing women’s fertility into the future.”

Facebook this year started offering to reimburse workers for up to $20,000 worth of reproductive-related costs, over the course of employment. Apple’s similar perks will start next year. The companies’ egg-freezing benefits were first reported by NBCNews.com on Tuesday.

Freezing  eggs  involves removing a woman’s  eggs  and cooling them to subzero temperatures to preserve them for future use and stop the  egg  from changing and developing. Generally speaking, the viability of a woman’s  eggs  can decline a bit at age 27 before taking a steeper drop around age 34 or 35. The rate of women who had their first child between 40 and 44 has more than doubled in the past 20 years, according to the federal Centers for Disease Control and Prevention. As more women wait longer to have their first child, the number of women choosing to  freeze  their  eggs  has grown “exponentially,” said Dr. Alan Copperman, a fertility specialist at Mount Sinai Hospital. They are also doing it at a younger age, which means healthier and more viable  eggs.

Freezing  their  eggs  gives women an option to focus on their career or education first, the “leaning in” that Facebook Chief Operating Officer Sheryl Sandberg champions. But the procedure can cost upward of $10,000, plus storage costs of several hundred dollars a year. Later it costs another several thousand to thaw and fertilize the  eggs  and implant them in the womb.

The number of  egg  freezing  patients at the New York University Fertility Center rose to about 400 this year from just five in 2005, said Dr. Nicole Noyes, a fertility specialist at the center. She said some big banks also are covering the procedure, and expects law firms to do the same if they want to keep good female employees.

Copperman thinks Apple and Facebook are ahead of the game in offering to cover the procedure, both as a recruitment and retention tool and from a public health perspective. He expects other companies to follow suit, “because it’s the right thing to do and it’s going to send a signal that women’s health should be a priority.”

“It’s telling women they have the opportunity to put off child bearing and focus on their careers,” he said. “(And) not make decisions based on certain reproductive limits women have.”

Apple’s and Facebook’s reproductive benefits policies could also appeal to gay and lesbian couples who want to use a surrogate or a sperm donor to have a baby, or heterosexual couples who incur in vitro fertilization costs not covered by insurance. Apple also reimburses adoption costs.

Coverage of infertility treatments is becoming more common among big employers, according to the benefits consultant Mercer. Sixty-five percent of companies with 500 or more workers covered the beginning step of an evaluation by a fertility specialist last year, according to Mercer’s annual benefits survey. That’s up from 54 percent in 2008. IVF coverage rose too. Slightly less than a third of companies offered no infertility treatment benefits, down from 41 percent.

But coverage of  egg  freezing  is rare. Corey Whelan, of the American Fertility Association, said she’s never heard of an insurer or employer covering the procedure for women who want to delay pregnancy for non-medical reasons like school or a career.

While the technology is growing more popular, experts stress that  egg  freezing  is not foolproof.

“It’s really, really important for women to know it’s not a guarantee of motherhood,” Whelan said. “Some women consider it an iron-clad insurance policy. It’s not.”

Surrogacy and the law