Humans may only survive 68 days on Mars—study

WASHINGTON—Space enthusiasts planning a move to Mars may have to wait to relocate: conditions on the Red Planet are such that humans would likely begin dying within 68 days, a new study says.

Oxygen levels would start to deplete after about two months and scientists said new technologies are required before humans can permanently settle on Mars, according to the study by researchers at the Massachusetts Institute of Technology (MIT).

The five-person team used data from Mars One, a Dutch-based non-profit group behind an audacious project to permanently colonize the Red Planet starting in 2024. 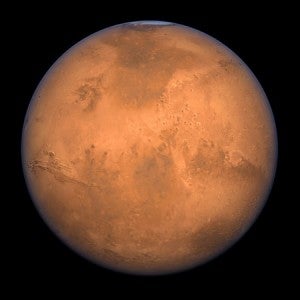 A shortlist of more than 1,000 people from an initial pool of 200,000 applicants will be whittled down to 24 for the mission — an irreversible move to Mars, which is to be partially funded by a reality television show about the endeavor.

But conditions on Mars — and the limits of human technology — could make the mission impossible, for now at least.

“The first crew fatality would occur approximately 68 days into the mission,” according to the 35-page report, which analyzed mathematical formulas on oxygen, food and technology required for the project.

Plants required to feed the space colony would produce “unsafe” amounts of oxygen, the authors said.

“Some form of oxygen removal system is required, a technology that has not yet been developed for space flight,” the study concluded.

Shipping in replacement parts is an additional challenge and will likely boost the cost of the mission, which the researchers estimated to be at least $4.5 billion.

Mars One co-founder and CEO Bas Lansdorp agreed that sending spare parts to Mars could pose a problem.

“The major challenge of Mars One is keeping everything up and running,” he told Popular Science magazine.

But he claimed the researchers used incomplete data, adding that technology for Mars colonization was nearly ready.

“While oxygen removal has never been done in space, I disagree that the technology is not mostly ready to go to Mars,” Lansdorp told AFP.

“Of course, the actual apparatus that we will take to Mars still needs to be designed and tested extensively, but the technology is already there.”

Many people have voiced doubts about the mission, though the project has won support from Gerard ‘t Hooft, the Dutch 1999 Nobel Physics prize winner.

The Red Planet lies at least 55 million kilometers (34 million miles) from Earth and it would take a minimum of seven months to get there.

Last June, the entertainment company Endemol, a major reality television producer, agreed to film the participants as they prepared for the move to Mars.