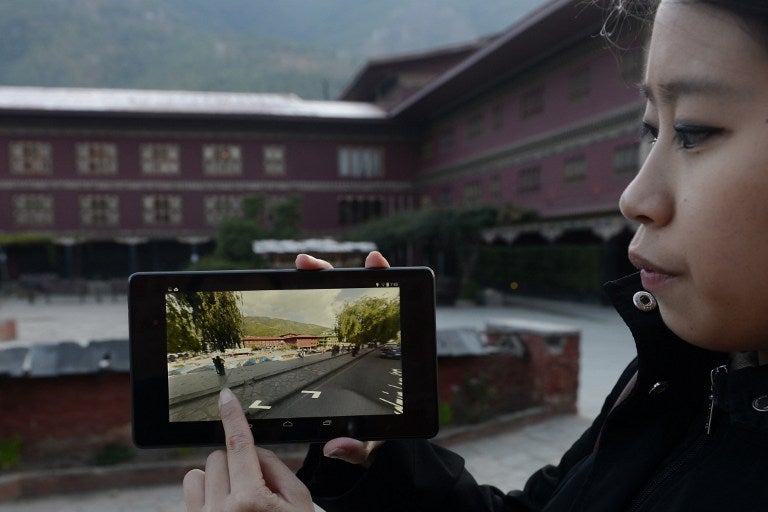 The “Land of the Thunder Dragon” has long been one of the most isolated countries on earth, only lifting its ban on television in 1999. Most foreign tourists have to pay a minimum $200 a day to visit.

But in a sign of its more recent embrace of modern technology, the government allowed Google to undertake a Street View project that could showcase some its natural treasures for Internet users.

“Most governments love Street View because it promotes tourism — they are drawn to its commercial benefits,” Google’s Divon Lan, one of the Street View managers, told AFP on Thursday as the project was launched.

“In Bhutan, the conversation was very different — essentially along the lines of ‘how can we bring Bhutan to the world without having floods of tourists turn up and erode our culture?'”

The project kicked off in March 2013 with a Street View car travelling across the country’s 3,000-kilometer road network.

The car, mounted with a custom-built camera containing 15 lenses that recorded more than a million photos, drew some curious responses during its journey, Lan said in an interview in the sleepy capital Thimphu.

“Villagers would see this strange-looking car and ask the driver about it. When he told them it was being used to take photos, they would get very excited and try to peer inside,” added Lan, who was involved in the digital mapping of Cambodia’s Angkor Wat temple complex.

The resulting stream of rapid-fire 75 megapixel images offers audiences a view of a land seen by very few, with the country welcoming its first tourists just 40 years ago.

Since then, its stunning scenery and its reputation as a Buddhist “Shangri-La” has attracted tourists, but numbers are tightly controlled.

Damcho Rinzin, spokesman for the national Tourism Council of Bhutan, said that while visitors were welcome, the country did not want to become just another travellers’ destination.

The push to preserve traditional culture is reflected in the traditional clothing worn by men and women — mandatory at public functions and offices.

“Google Street View is a way of preserving our culture at a time of great change. It reminds us of what we have in Bhutan,” Rinzin said.