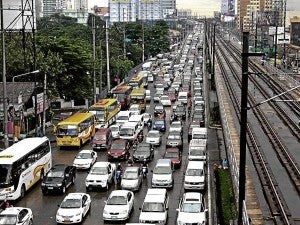 MANILA, Philippines—In a case where government regulators appear to be playing catch-up with technology, the Land Transportation Franchising and Regulatory Board (LTFRB) apprehended a driver of a private vehicle whose services were tapped by a paying rider through a mobile app.

The LTFRB acted on a complaint from the Philippine National Taxi Operators Association (PNTOA) against Uber, a technology start-up that connects passengers with private drivers for hire through a mobile app of the same name.

According to PNTOA, the vehicles hired through Uber should be apprehended for being colorum or for operating like taxicabs without the proper franchise.

In a sting operation arranged by the LTFRB on Wednesday, a poseur customer booked a ride using Uber from Metrowalk in Pasig City to Quezon Memorial Circle in Quezon City, with the fare set at P350, according to Dennis Barrion, chief of staff of LTFRB Executive Director Roberto Cabrera.

Upon reaching the destination, the driver of the black Toyota Fortuner (WII 360) was approached by teams from the LTFRB and the Land Transportation Office (LTO) to confiscate his license and have the vehicle impounded for a franchise violation, Barrion said.

The offense carries a P200,000 fine under the LTFRB-LTO Joint Administrative Order 2014-01, a directive issued in June that sharply raised the penalties for erring drivers and operators.

Barrion said the same poseur customer booked another trip that day, this time from Timog Avenue to East Avenue in Quezon City. However, the assigned driver later told the would-be client that the booking had been canceled. The customer later discovered that his Uber account had already been blocked.

In an interview Thursday, PNTOA president Bong Suntay, who is also a Quezon City councilor, said “we’re complaining because Uber and the vehicles they are using are basically colorum vehicles.”

“[Uber] will say they are just a technology [provider], a marketplace, but the vehicles they are using cannot legally charge the passengers,” Suntay said. “It’s unfair to legitimate public utility vehicles because we pay taxes, we pay regulatory fees and supervision fees.”

“And yet they (Uber network of vehicles) are competing with us when they’re not licensed to do it,” he added. “They also don’t have liabilities if something happens to the passengers.”

Uber on Wednesday issued a statement addressed to its partner drivers and operators, calling the LTFRB operation “unfair.”

“As we have always assured you—and all our partners in the 220+ cities we operate in globally—we will support you and seek swift resolution to this incident. Ever since Uber was launched in Manila almost a year ago to introduce the safest and most reliable way to get around the Metro, Filipino riders have unanimously rallied behind you by taking more and more trips with you every day.”

Uber Manila, whose parent company is based in San Francisco, also encouraged its partners to contact the company when faced with a similar situation.

In an interview, LTFRB Chair Winston Ginez clarified that Wednesday’s sting operation targeted and penalized only the driver of the private vehicle—not Uber itself. “We haven’t looked into Uber’s liability insofar as the LTFRB is concerned,” he said.

But Ginez said Uber may be acting as “a conduit that facilitates private vehicles to commit a violation of the Public Service Law.”

“[Uber] doesn’t need to secure a franchise because it’s not a transport company. They don’t carry passengers,” Ginez said. “But through its application, private unlicensed vehicles are able to engage in public land transportation without securing a franchise from the LTFRB.”

But another government agency concerned with mass transport asked the LTFRB to go easy on Uber.

In a statement on Thursday, the Metropolitan Manila Development Authority (MMDA) urged the board to find ways to “reasonably assist transport services like Uber,” instead of cracking down on their operations, in view of the inadequate public transport systems in the capital.

“The muscle of the law and the procedural and technical arms of government agencies alone cannot solve the lack of alternative means of transportation. They can only increase apprehension records. Uber or hybrid carpooling is a well-meaning technology-driven effort intended for public safety and convenience. That’s why people are patronizing it,” said MMDA Chair Francis Tolentino.

The MMDA chief also pointed out that the government could not curtail the “mobility rights” of the people. “This (service) is similar to private bridal cars and private ambulances for rent which is a private transaction between the rider and the owner of the vehicle.”

“Inasmuch as the government would not allow the taxicab industry to fail, it should not also curtail the options (presented by Uber), the convenience, comfort and riding safety,” he said, noting that the company also offers top-of-the-line sport utility vehicles and limousines.

For Tolentino, there is still “another way of looking at this system” since it does not clash with the Public Service Law and has “proven to be beneficial to commuters.”