How world-class brass sculptor Michael Cacnio shapes his and his family's destiny in this digital age with PLDT HOME Fibr
10:59 AM October 26, 2014 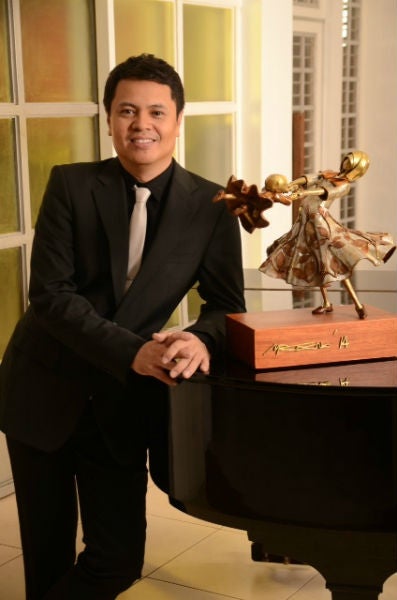 MANILA, Philippines – Much like anything else in life, it takes a certain balance between passion and hard work to perfect your craft. Add in a bounty of prayers and you’ve got internationally famed brass sculptor Michael Cacnio’s recipe for success.

Having been surrounded by art all his life, the 2006 The Outstanding Young Men (TOYM) awardee learned to understand and appreciate art from an early age.

His father, Angel Cacnio, has been nominated to be one of the Philippine’s national artists due to his widely recognized works depicting Philippine heritage. “I spent a lot of time playing and drawing doodles in my dad’s office,” he said “I believe that you get molded by your environment. Thanks to my father, who was an artist and an art collector, our house was filled with artworks.”

The younger Cacnio studied to become a painter himself at the University of the Philippines but after some time apprenticing for his father, he felt that proving himself would be a tough undertaking.

“My father is known in the art circle and people think that this made it easier for me to achieve a breakthrough. But in reality, it was more difficult. I wanted to have my own identity. I wanted to create a style that was different from my father’s, but at the end of the day, people were still comparing my works to his,” he recounted.

Influenced by the likes of distinguished Philippine National Artist for Sculpture Napoleon Abueva and Swiss sculptor Alberto Giacometti, he went on a different route and took on sculpting. But instead of creating massive sculptures which was the trend at the time, the young artist decided to craft ones that can be displayed inside the homes of his clients.

“Sculptures are like pieces of jewelry that you adorn your home with. I chose brass because I find the color very intriguing-it stands out. It also evolves. As brass ages, it transforms into this classy, darker color,” he said.

In 2007, Michael Cacnio became the first Filipino artist to be featured in a solo exhibit in the European Commission’s headquarters in Berlaymont, Brussels. To date, the strong-minded brass sculptor of the social realist genre has had over 50 exhibits worldwide and masterpieces which have gained praises in Asia, Europe, and the United States, thus solidifying his own legacy in his craft.

Throughout his two and a half decade career, the 45-year-old sculptor’s artworks have been centered on the magic of childlike playfulness. His Kites and Balloon collections show cheerful depictions of children and parents teeming with worry-free delight.

“I draw inspiration from my childhood. As the youngest of the family, I was very carefree and playful. I was always out on the streets of Malabon playing the latest popular games,” he said.

Cacnio’s children, Jacob (16), Mateo (13), and Lucas (8), are all brought up in the same happy-go-lucky setup akin to his spirited artworks. Family bonding is always very important to him, whether it’s through meals, prayer, or enjoying movies streamed with PLDT HOME Fibr at home.

“I don’t force my children to become artists or to follow the same path I did. My wife Tess and I support their decisions in life,” he said. “Mateo and Lucas, my two younger boys, play the piano very well. I guess art is a prevalent niche in our family, not necessarily limited to painting or sculpting. Jacob on the other hand is a natural-born sculptor and painter, but he is also very business-minded. At any rate, whichever career they choose to take, I’m confident that they will all be able to uphold the Cacnio legacy.”

Cacnio witnessed how art evolved and reinvented itself through the years. He believes that art is becoming more alive today because of technology. New artists and art techniques are being honed and discovered with the help of the Internet. Cacnio also uses this technology to further cultivate his craft.

“I recall the time when I had to go to the library or buy books just to find out about the lives of other sculptors. It was very difficult to find the information that I needed, but now, I just go online and I could research about everything. With the help of the Internet, I can read up on the different trends in art-which material goes well with others. It’s a never-ending wealth of knowledge,” he said.

Since he subscribed to the unparalleled service of PLDT HOME Fibr last year, the acclaimed artist has had more time to further sharpen his techniques and enjoy the rewards of his hard work. “Now that my work process is being complemented by the power and speed of PLDT HOME Fibr, I push myself to create more powerful timeless pieces by experimenting with my technique.”