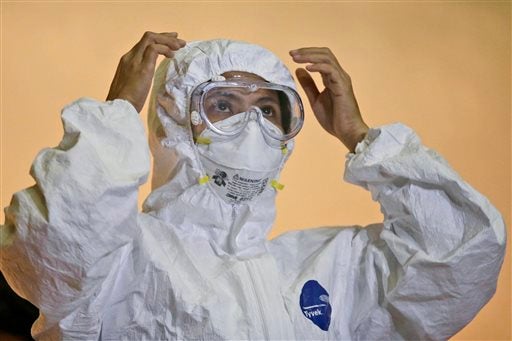 In this Oct. 21, 2014 file photo a health worker shows the proper way to wear an “Ebola suit” during a media tour of the Research Institute for Tropical Medicine facility to show the Philippine government’s readiness in the still Ebola-free country at Alabang, Muntinlupa city, south of Manila, Philippines. AP

WASHINGTON – Nine days before Ebola was declared an epidemic, a group of researchers and computer scientists in Boston spotted the hemorrhagic fever beginning to spread in Guinea.

By scouring the Internet for clues from social media, local news reports and other available online data, the algorithm developed by HealthMap had an early picture of the deadly disease moving across West Africa.

“Official agencies tend to be more cautious about these announcements, so public communication tends to lag,” said Clark Freifeld, who co-founded HealthMap in 2006 at Boston Children’s Hospital.

“We see this as our role to get that information out there quickly even though it may not be validated at the same level as official announcements.”

It is impossible to know whether earlier detection may have helped contain the spread of Ebola, but many scientists say this type of “big data” approach can be useful in curbing epidemics.

So far, this approach has been used mainly for detection; but some experts say the technology sector’s predictive analytics could be even more useful.

If that is the case, the same kind of technology that helps marketers deliver targeted ads and suggest music or films could be useful in the fight against communicable diseases like Ebola.

“I think big data has a huge potential to help fight not only Ebola, but other disease outbreaks,” said Marisa Eisenberg, a mathematical epidemiologist at the University of Michigan who has used data models to study other outbreaks, like the cholera epidemic in Haiti.

Eisenberg said it is possible to get better information by analyzing Twitter messages, airline data, emergency calls and other available health data.

“We need to find a way to do these things on a large scale, using real-time data because time is of the essence,” she told AFP.

Getting data quickly could enable health officials to get resources and treatment where it is needed to contain disease outbreaks.

In the tech community, Microsoft announced that it would make its cloud computing platform Azure available to researchers battling Ebola.

And multimillion-dollar donations to the effort have come from Facebook chief Mark Zuckerberg and the Bill and Melinda Gates Foundation. Paul Allen, a Microsoft co-founder and philanthropist, has pledged $100 million.

The efforts come as the number of Ebola infections surpassed 10,000 and the death toll neared 5,000 worldwide, mainly in three West African nations.

But Silicon Valley needs to do more to keep Ebola from spiraling out of control, said Vivek Wadhwa, a Stanford University research fellow and faculty member at California’s Singularity University, which promotes innovative technologies.

“The tech industry does amazing things, because they take a big problem and attack it from all sides,” Wadhwa told AFP.

But he said entrepreneurs involved in health technology “are frustrated because no one is listening to them.”

There are already some technological tools that could be deployed in the Ebola fight, in areas such as software diagnostics and vaccine delivery as well as cloud-based data analysis.

“Just as airlines mine travel data to predict which flights are going to be full and to set airfares, data scientists can mine travel, epidemic and passenger-load data to determine the probability of a passenger’s being a disease carrier,” Wadhwa said in a blog post.

This effort has the potential to succeed in part due to the ubiquity of mobile phones around the world, and growing participation in networks like Twitter and Facebook, where posts can be analyzed for clues about disease.

HealthMap collects and interprets data in 15 languages, and uses both software and human experts for more detailed analysis. It has previously tracked the H1N1 virus and can monitor the movement of other diseases.

“One of the challenges is that when a signal first emerges you don’t know if it’s going to turn into an international situation,” Freifeld said.

“There are small outbreaks all the time; the question is when it becomes more serious.”

Yet some relatively simple efforts using technology have apparently been used successfully.

Nigerian Minister of Communication Technology Omobola Johnson told a conference that technology and social media were key to her country being declared Ebola-free.

“A combination of the use of an Android app, Facebook and Twitter were instrumental in Nigeria’s fight to contain the Ebola virus,” Johnson said.

“With Ebola, time is very important. The phone app helped in reducing reporting times of infections by 75 percent. Test results were scanned to tablets and uploaded to emergency databases and field teams got text message alerts on their phones informing them of the results.”

WHO: Number of Ebola-linked cases passes 10000