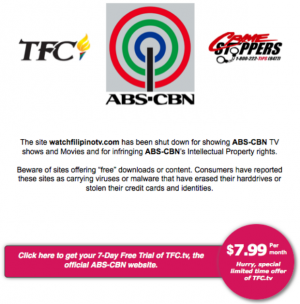 PORTLAND, Oregon – Filipino broadcasting mainstay ABS-CBN received a judgment from the US Federal District Court in Oregon against Jeffrey Ashby for damages of $10 million resulting from his infringing the copyrights and well-known trademarks of ABS-CBN by rebroadcasting ABS-CBN’s popular TV shows and movies on his pirate websites.

“I wish to warn anyone who may be copying and/or publishing content owned by ABS-CBN without their permission, to stop immediately. Continuing without authorization can and will lead to very serious consequences,” Jeffrey Ashby said in a statement after the $10 million judgment.

“Jeff Ashby is the first of many pirates that we are pursuing,” said Elisha Lawrence, associate vice president of Global Anti-Piracy for ABS-CBN International, “We have begun a relentless campaign to enforce against all pirate websites due to the numerous reports that these sites contain dangerous malware which cause substantial harm including identify theft of financial information and phishing attacks.”

ABS-CBN has recently partnered with Crime Stoppers USA. Call 1-800-222-TIPS (8477) or text TIPLA plus your tip to 274637 if you have any information on a pirate website, and you could be eligible for a reward if your information leads to the conviction of the pirates involved.

ABS-CBN is represented in Oregon by Matt Levin of Markowitz Herbold PC, in New York by Tony Onorato of Steptoe & Johnson and in Florida by Stephen Gaffigan.